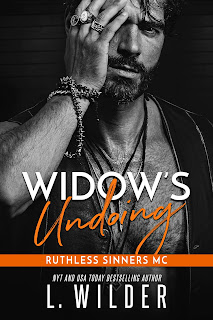 Note: An advanced reader copy (ARC) was provided by the author via Enticing Journey Book Promotions.
Widow's Undoing is the fourth book in L. Wilder's Ruthless Sinners MC series, and it's the story of Widow, whose real name is Roman but whose last name I don't recall being mentioned. Having survived brutally abusive father made Widow into thhe man he is today. He tries to maintain a strong hold on his temper, but when he sees someone being harmed in any way, he unleashes it to the detriment of those evil doers. He's been with countless women but has never been in actual relationship. He's never been interested in even considering commitment. Then he meets a single mother stranded by the side of the road, and Frances Sullivan is the game changer he never saw coming. To be fair, Frankie never thought she'd be drawn to a man who was part of a motorcycle club. Can she entrust her heart and those of her two sons to a man who's never known love in his life?
As always, L. Wilder brings the romance with the suspense and action in her latest MC romance read. Single parent romances are one of my favorite tropes, and I liked seeing the kinder, more nurturing side of Widow in this book. He became very protective, not just of Frankie but her two boys, Corry and Sean. I appreciated that there wasn't much drama when it came to their relationship. The topic of abusive, both parental and spousal, is a heavy one, but Wilder managed to handle it well, not sugarcoating it but also not having to be overly in your face. There are also a couple of side stories aside from the romance, one focused on the club and the other with regards to Frankie's ex, and they melded well, creating a pretty good flow from start to finish. Four stars for Widow's Undoing and I look forward to the next book Wilder has in the Ruthless Sinners MC series.
-------------------------
Read my reviews for the Ruthless Sinners MC series: