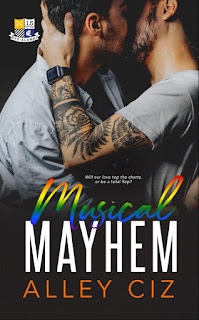 Note: An advanced reader copy (ARC) was provided by the author via Wildfire Marketing Solutions.
Alley Ciz is a new-to-me author, and while I prefer to read books in a series in order, I decided to take my chances with this newest release in her BTU Alumni series as my introduction to her writing. Musical Mayhem is a novella, and based on the official reading order, it falls between the first two full-length novels (there are five in all), Power Play and Tap Out. This was originally released as part of the multi-authored The Rule Breaker Anthology published a year ago, but it has been revised and expanded since then.
Musical Mayhem is an M/M romance featuring a closeted rock star falling for his band's new record producer. Twenty-six-year-old Jamie Hawke is the lead singer of the Birds of Prey, and just as he was giving up hope in them finding the right producer for their fifth album, eighth time's the charm! Twenty-four-year-old Samuel "Sammy" Rhodes has made a name for himself as a DJ and producer, but working with his favorite band would definitely be a feather in his cap. He's the perfect fit for BoP; the problem is he could be the perfect for Jamie too. Is Jamie willing to risk it all for a chance at love with Sammy?
I love M/M romance, which is why I decided to dive into a series without having read any of the previous books first. In terms of Jamie and Sammy's story, I did have a good time reading it, and both main characters were easily likable and I was rooting for their happily-ever-after from the get-go. Everything pretty much plays out the way I expected it to, but that didn't take away from my overall enjoyment of the novella. Having said that, this is a reminder of why I have the whole reading books in a series in order rule in place. There was a plethora of characters whom I assume were in the full-length novels, and I felt a tad lost. All things considered, Musical Mayhem was still a four-starred read.
Release Date: 23 March 2021
Date Read: 22 March 2021
Learn more about Alley Ciz.
Purchase Musical Mayhem on Amazon.