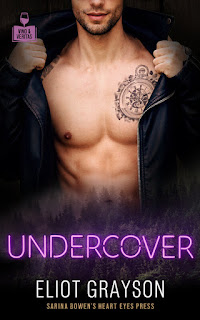 Note: An advanced reader copy (ARC) was provided by Heart Eyes Press.
One of my favorite things about Sarina Bowen's World of True North collection is that I'm discovering authors whose work I've yet to have the pleasure of reading. Eliot Grayson is one of those authors and Undercover was my introduction to her writing. We meet Gabriel Middleton, a twenty-seven-year-old from a wealthy family who was recently kicked out of his doctorate program, and Alec Kaminsky, a thirty-one-year-old FBI Special Agent working undercover to take down a drug smuggling operation in Burlington, Vermont. When Gabe leaves a bag of books about drug kingpins for Alec at Vino & Veritas, Alec can't help but wonder if Gabe could be involved in the drug operation. Using the guy shouldn't make him feel guilty, not if it means getting drugs off the streets. But the more time they spend together, the more Alec the guilt--and maybe even love--get to him. Will he be able to pull off this undercover job off and still have the guy he's falling for?
This was an entertaining read, one with a hint of mystery and suspense to it courtesy of Alec trying to figure out who could be the possible mastermind of the drug smuggling in Burlington. Alec and Gabe had a good mix of heat and heart going for them, even though they didn't really have the most endearing of starts, but then that's what happens when one of you happens to be an undercover federal agent. They were like each other's yin and yang, one broody and dark, the other cheery and light. They definitely were an interesting pair, and I liked seeing them going from awkward start to sweet finish. The pacing of the story was good, and the supporting cast of characters were exactly that--support to help push the story forward but never stealing the spotlight from either Alec or Gabe. All in all, Undercover held me attention and was a four-starred addition to the Vino & Veritas series. I'm also going to check out Eliot Grayson's back list sometime soon!
Release Date: 29 March 2021
Date Read: 28 March 2021
Learn more about Eliot Grayson.
Pre-order Undercover on Amazon.