Release Blitz: Starting from the Top by Lane Hayes 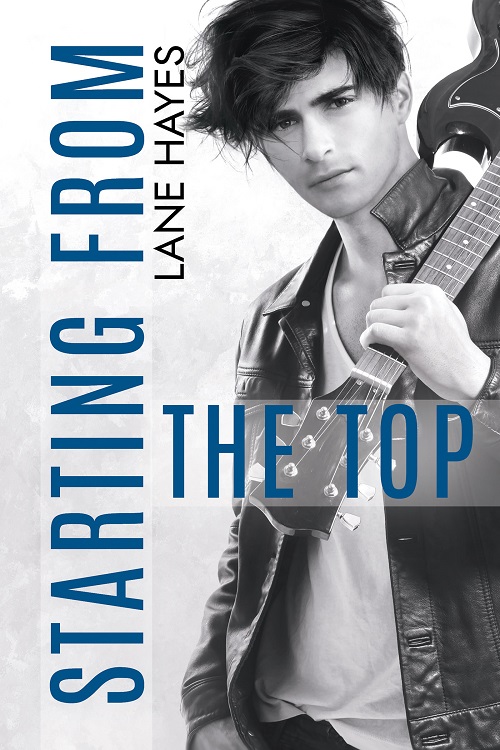 About Starting from the Top
The guitarist, the dad, and a band on the rise…
Johnny
A quiet place to live and some time to recharge before my band heads out on the road again sounds amazing. I wouldn’t mind a distraction too, but my new neighbor is off-limits. There are rules about not getting involved with your bandmate’s ex, right? And Sean isn’t my type anyway. He’s too bossy, too commanding, and he has way too much baggage. I’ve learned that it’s best to let go of the heavy stuff. So why am I so drawn to him?
Sean
Coming out later in life has taught me to protect my privacy at all costs. And while juggling a handful of businesses and two kids isn’t easy, I excel at the art of multitasking and keeping everything separate. But Johnny blurs those lines. He’s easy-going, sweet-natured, and cool. In short, he’s everything I’m not. I want to know all about him…starting from the top.
Starting from the Top is a MM, bisexual romance with some rock and roll, an age gap, and a little family fun! Each book in the Starting From series can be read as a stand-alone. 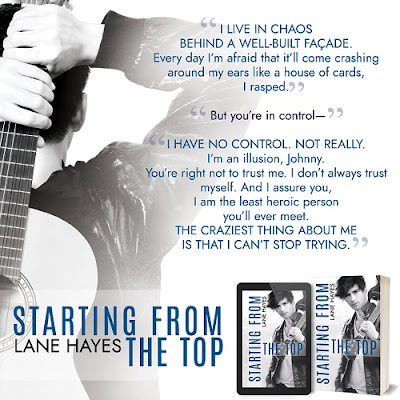 Read my five-plus-starred review of Starting from the Top.

Add Starting from the Top on Goodreads. 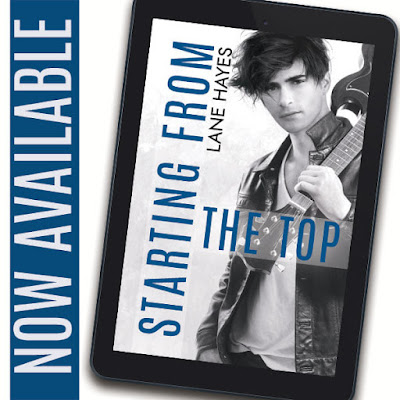 An Excerpt from Starting from the Top
The cheery sound of family fun drifted through the house…the dog barking, cupboards closing, and a girlish squeal of delight. And more dog barking.
I chuckled at the chaotic homey cacophony. I would never have envisioned this was Sean’s life. He’d always seemed like a badass boss to me—not a man who’d wear an apron to bake cupcakes with his daughter while his son had a guitar lesson. His chocolate mussed hair and concerned parental frown made him look goofy and yet very…endearing. In a hot dad way.
Okay. Definitely time to go. I reached for the knob just as Sean did.
“I’ll walk you out,” he insisted, holding the door open.
I stepped onto the porch and blinked against the bright afternoon sun at the hilltop view of the city. “Wow. This is nice.”
“Yeah,” he agreed absently. “How was he?”
“Amazing. The next Chuck Berry.”
Sean sighed grumpily. “Less sarcasm, please.”
“Sorry, Dad.” I snickered. “He was great. I mean, he sucked, but I think he had fun. I told him to keep the guitar and practice on his own. If you want me to come back, I will.”
“Really? That’s good.” He stared at the horizon for a moment before glancing my way. “I wanted to—why are you smiling at me?”
“You’re fuckin’ covered in chocolate. It’s in your ear.” I made a face and tugged at my own ear.
He gestured at the apron. “Baking isn’t my thing.”
I flashed a megawatt grin at him. “Sure, it is. Are you decorating those cupcakes with anything besides frosting?”
“Sprinkles. You’re welcome to join us.”
“Thanks, but I don’t want to crash your family time.”
Sean inclined his head. “So…did he talk to you?”
“It took a little coaxing. Full disclosure…we played video games before we picked up the guitars. You’re not paying me, so I don’t really feel guilty. I just don’t want you to think it was a jam session from the start.”
“I know.”
“You know?” I repeated.
“I snuck in to see how you were doing. Hulk let you down. You might want to go with Iron Man or Captain America next time.”
“I’ll keep that in mind.” I snort-laughed, then sobered. “As for Parker…he’s a good kid. He’s shy, reserved, and likes organization. He seems like the kind of person who excels at things he can control. I bet he builds killer Lego sets. He might learn a few songs, but I doubt he’s a savant. You never know, though. Kids are sponges. They pick up stuff you and I would never catch.”
“That’s true. I’m impressed. And you’re right…about everything. He keeps a lot inside. He’s always been that way. Very thoughtful and methodical. He sets a high bar for himself. He likes to get things right the first time. He does well in school, but he’s struggling with the transition to junior high. His old friends tried out for sports and he opted not to. It’s left him feeling ostracized and alone. Hormones don’t help. I thought it might be good for him to spend time with someone cool who—”
“Cooler than you?”
“Well, let’s not get crazy.” Sean flipped the corner of his apron and let out a self-deprecating laugh. “I just…thanks for doing this. I appreciate it.”
“No problem. Hey, if he really is interested, we can do this regularly. My schedule is light for the next couple of months, but it’ll get crazy again in late spring.”
“I’ll call you.”
“Text me. I hate phone calls.” I held out my right hand and snatched it away a second later, narrowing my gaze. “You have frosting on your nose.”
“My nose?” He wiped his hand over the apron, then across the tip of his nose. “Did I get it?”
“No. Come here. Let me help you.” I stepped into his space and brushed the sugary goodness away.
“Did you get it?” he asked in a huskier than normal tone.
“Yeah, but it’s on your ear and your chin and…”
“Where else?”
“Here.”
I ran the pad of my thumb under this bottom lip. “Got it.”
I didn’t move. I should have, but something held me in place. I studied his features, noting the flecks in his eyes. I wondered what color they were…gold, green, brown? I traced a line at the corner of his mouth, rubbing the scruff of his neatly-trimmed beard. I stared at his full lips for a long moment before meeting his gaze. Then I inched closer and…kissed him.