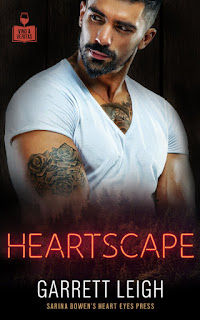 Note: An advanced reader copy (ARC) was provided by Heart Eyes Press.
When I found out that Garrett Leigh was one of the authors who was going to be part of the multi-authored Vino & Veritas series, which is part of Sarina Bowen's World of True North collection, I may have done a happy dance. I love Leigh's writing, and the fact that she sates my need for angst doesn't hurt. Heartscape is her contribution to the series, and while it isn't as heavy as most of my other reads from her, it still packs that emotional punch that I've come to expect from Leigh's books. This is the second novel in the Vino & Veritas series, and while there are recurring characters and one of the main characters here is introduced in the series starter, Annabeth Albert's Featherbed, Heartscape can very much be read as a standalone, so have no fear about diving in straightaway with this new book, but check out the first book because it was a fun read, too.
The fire at a nearby hostel caught Burlington's notice, but it was one of the people who managed to make it out of the blaze unscathed--although several possessions lighter--that captured twenty-eight-year-old bar manager Tanner Reid's attention. When Tanner is asked by his younger brother's girlfriend to help her closest friend out, it turns out that said friend was the same guy from the fire. Jax (whose last name I don't recall being mentioned, but if you happen to have seen it in the book, feel free to let me know!) is a twenty-six-year-old British expat with a witty sense of humor and someone whose presence Tanner can't seem to get enough of. But both men carry scars, alongside a heavy dose of guilt and a lack of assuredness. For any hope to have a future together, they'll have to make choices and finally move on from their damaged pasts.
There's just something about Garrett Leigh's stories and characters that have me becoming so emotionally invested that there's simply no distracting me while I'm in the midst of it all. Tanner and Jax have suffered their share of traumatic events, and were dealing with the aftermath in their respective ways, although on Tanner's part, it was a lack thereof. I liked how Jax inspired Tanner to take steps forward, breaking through that frozen state that Tanner's life was in, bringing in some much needed--and much deserved--love and warmth. Leigh has always been a master when it comes to damaged heroes, and she shows in this latest novel of hers that she's still got it. She made me visualize the beautiful backdrop Tanner and Jax's story plays out, and I fell for every single bit of it, hook, line, and sinker. Heartscape is a total must-read. Five-plus stars.
Release Date: 22 March 2021
Date Read: 19 March 2021
Learn more about Garrett Leigh.
Pre-order Heartscape on Amazon.