Book Spotlight: Summer by the River by Debbie Burns 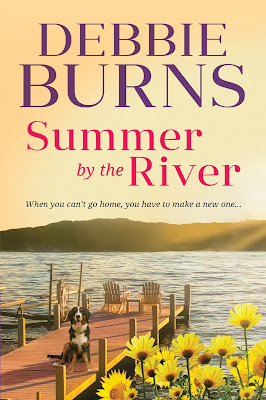 Summer by the River
by Debbie Burns
Date Released: March 2, 2021
About Summer by the River
Bestselling author Debbie Burns combines her love for rescue dogs with a compelling woman’s journey in her brand new romantic women’s fiction.
Making a fresh start in a new part of the country is challenging, but fate and good fortune lead young single mother Josie Waterhill and her six-year-old daughter to a cozy Midwestern town right on the river. There, Josie can raise Zoe away from the violence of the life she once knew, and make a new home in the historic tea house where they’ve been invited to stay.
The tea house seems too good to be true, until Josie’s elderly landlord Myra welcomes more guests—journalist Carter O’Brien and his giant rescue dog, Buttercup. Carter is charming, compassionate…and way too curious. Carter’s interest in Josie deepens and he inadvertently stirs up trouble when he uncovers things that Josie would rather not have known. Ready or not, Josie has to let go of her painful past so she can create a glorious future.

An Excerpt from Summer by the River
A suave and polished journalist showing up unannounced to dig up long-buried secrets wasn’t a good thing. Josie was certain of that.
By the time she got the temperamental printer working and returned to the terrace, Josie noticed most of the weekend’s guests had finished their tea, cake, and scones and were dispersing. Zoe and Carter were halfway down the hillside, and the hair on the back of Josie’s neck prickled at the sight of her daughter being so carefree with a stranger. Her feet itched to join them, but she checked herself. Certainly, there was no better place than here to give Zoe a bit of trust and see what she did with it. Josie busied herself with cleaning off the empty tables on the expansive brick patio. As they rounded the top of the yard, Carter nodded toward Josie. “Myra’s right. These gardens are spectacular.”
“Thanks.” She set the packed-full busser tub on the closest table and slipped his license out of her pocket, offering it his way.
“Would you like my card?” he asked as he tucked his license back into his wallet. “As I mentioned, I’m freelance, but you can Google me. Plenty of my work is online.”
“Thanks.”
It was a simple, gray-scale business card with his contact information and an image of an old-fashioned typewriter. She’d never known anyone who made their way on this earth exclusively by stringing words together, and was impressed. She was a numbers person. With numbers, she could always find her way. Words were different, complicated. Sometimes they told the truth; other times they were wickedly deceitful.
“So, tell me,” he said with a lopsided grin, “was your asking for my license a formality in case I steal a few towels while I’m here, or in case I follow in my grandfather’s footsteps?”
Josie fought back a laugh as his words sank in. “Around here, you never know.”
Carter was boyishly charming—she’d grant him that. She bet that smile could grab attention a hundred feet away. And then there was that dimple on his right cheek.
“Do you, uh, want to see your room?”
“Sure, that’d be great.”
They headed inside, with Zoe pausing to point out all her favorite places on the lower floor, such as the window seat in the breakfast room at the side of the kitchen that had a clear view of a robin’s nest.
“This house is truly phenomenal,” Carter said as they ascended the massive staircase to the second floor. Josie forced her gaze away from his fingers as they brushed the top of the mahogany banister.
“How many rooms does this place have?” Carter tapped the rounded newel as he took in the second-floor split hallway.
“Six with private bathrooms,” she answered, “plus two on the third floor that share a bathroom. Your room’s down the hall. It’s a great room—a lot of space and one of the best bathrooms in the house. And a wonderful view of the gardens out back.”
“Spoken like someone who knows it well.”
“You could say that.” Josie opted not to add that, when it was just her, Myra, and Zoe here, she often went into that room for a soak in the oversized bathtub after Zoe was out for the night.
“Nice,” he said as she swung open the door. He paused to take it in and nodded appreciatively. “They don’t make houses like this anymore, do they? Great bone structure.”
“If it wasn’t for the Victorian wallpaper covering it all up, you mean?”
He grinned, his teeth gleaming. “Looks like I’m in a lady’s retreat after all. Is that what happened to the guy who pulled out? He didn’t have a tolerance for lace and doilies?”
“He’s mad at his father for getting married again,” Zoe piped up.
“Zoe, honestly. Sometimes I think you hear through walls.” Josie shrugged. “It’s one of those weddings that’s not without a bit of controversy. They were childhood sweethearts who ended up marrying other people. Their spouses have passed away, and now they’ve found one another again.”
“But Linda says they’re hurting everybody’s feelings,” Zoe added. “Acting so in looove.” She drew out the word like it was replete with cooties.
Carter laughed. “Kid, you’re wise beyond your years.”
Josie ran her fingers down Zoe’s hair. “So… Make yourself at home. You’re Myra’s guest. The key is on the dresser. It’s bulky to carry around. If you don’t want to take it with you into town, you can drop it with Myra.”
He strolled over to the dresser and inspected the brass skeleton key. “No plastic cards here, huh?”
“We’re all about authenticity. Oh, I almost forgot. In honor of the wedding, everyone’s being treated with the getaway package from back when this place ran as a B and B. That means homemade cookies and wine delivered each night around nine. There’s a menu on your bed for tomorrow’s breakfast. And there’s champagne in the mini fridge and some extras on the tub as well.” Her cheeks warmed involuntarily at the last bit.
He cocked an eyebrow. “Is that so? Too bad I’m traveling alone.”
She took Zoe by the hand to leave.
“And you’ll just be down the hall if I have any questions about how to work the tub or anything, right?” Carter asked, the playful grin returning to his face.
After that introduction of his, it didn’t surprise her that he was a flirt. “You strike me as being tech savvy. But if you have trouble, ask your questions early. I’m off duty tonight after I deliver cookies.”
He tsked. “What a shame.”
Josie pulled Zoe out of the room and closed the door before the smile that was tugging at her lips broke through to the surface.
Excerpted from Summer by the River by Debbie Burns.
© 2021 by Debbie Burns.
Used with permission of the publisher, Sourcebooks Casablanca, an imprint of Sourcebooks, Inc.
All rights reserved. 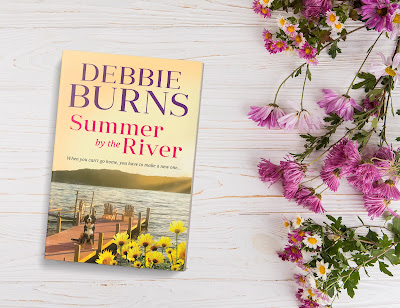 About Debbie Burns
Debbie Burns is an award-winning and bestselling author and 2019 HOLT Medallion Award of Merit recipient. Her highly praised Rescue Me romance series features happily ever afters of the two- and four-legged kind. She lives in a gingerbread house that's almost cute enough to eat in Saint Louis.
Connect with Debbie
Website | Facebook | Twitter | Instagram | Goodreads