Book Spotlight: The Path to Sunshine Cove by RaeAnne Thayne 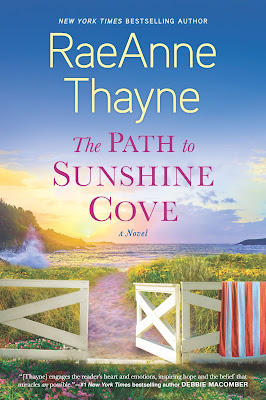 The Path to Sunshine Cove
(Cape Sanctuary #2)
by RaeAnne Thayne
Release Date: March 30, 2021
HQN Books
About The Path to Sunshine Cove
She knows what’s best for everyone but herself…
With a past like hers, Jessica Clayton feels safer in a life spent on the road. She’s made a career out of helping others downsize—because she’s learned the hard way that the less “stuff,” the better, a policy she applies equally to her relationships. But a new client is taking Jess back to Cape Sanctuary, a town she once called home…and that her little sister, Rachel, still does. The years apart haven’t made a dent in the guilt Jess still carries after a handgun took the lives of both their parents and changed everything between them.
While Jess couldn’t wait to put the miles between her and Cape Sanctuary, Rachel put down roots, content for the world—and her sister—to think she has a picture-perfect life. But with the demands of her youngest child’s disability, Rachel’s marriage has begun to fray at the seams. She needs her sister now more than ever, yet she’s learned from painful experience that Jessica doesn’t do family, and she shouldn’t count on her now.
Against her judgment, Jess finds herself becoming attached—to her sister and her family, even to her client’s interfering son, Nate—and it’s time to put everything on the line. Does she continue running from her painful past, or stay put and make room for the love and joy that come along with it?

New York Times bestselling author RaeAnne Thayne finds inspiration in the beautiful northern Utah mountains where she lives with her family. Her books have won numerous honors, including six RITA Award nominations from Romance Writers of America and Career Achievement and Romance Pioneer awards from RT Book Reviews. She loves to hear from readers and can be reached through her website