Review: Starting from the Top by Lane Hayes (Starting From #4) 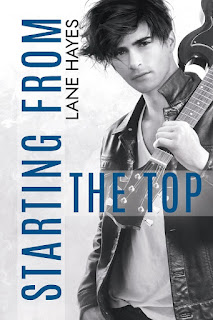 I held up my hand, then swiped at my face and sniffed. "I'm not. If you want to label me...I'm the guy who just loves you."

This book should have come with a tissue warning! Waaah! As much as I've always loved Lane Hayes's work, I must say that it feels like forever since I last cried while reading one of her more recent books. That last time I shed tears was back in June of 2018, and the book was none other than Leaning Into Forever. I could be wrong, but that was the book that really affected me and left me with one heck of a book hangover long after I was done reading the story and then long after I was finished writing my review. And then the story of a musician on the cusp of superstardom with his band and a businessman and single father juggling his professional and personal responsibilities landed in my tablet, and now, Starting from the Top is sitting prettily among my top reads from Hayes.
This fifth release in the Starting From series pairs Johnny Martin with Sean Gruen. The former is the thirty-year-old guitarist of Zero, an indie band that's making a huge name for itself in the music scene; the latter is the forty-five-year-old owner of several businesses in West Hollywood and Palm Springs. At first glance, Johnny and Sean are a study in contrasts--Johnny is more laidback and quite out and proud, and Sean is more controlled, and while he, too, is openly bisexual, he prefers to keep his private affairs under wraps. One is passionate about his music, while the other is devoted to his two children, Parker and Penny. When these two come together, it's life-changing, but just how much change is Sean ready and willing to open himself--and his life--to for Johnny?
My word, but how this book hit me in the feels. Johnny and Sean may have seemed like opposites, but the more the layers were peeled back, the more it became clear that they may have had more similarities than first thought. It was difficult not to like these two, especially given how entertaining their interactions tended to be. I loved seeing them trying to keep things casual, pretending they were just new friends who were getting to know each other...REALLY well, if you know what I mean. Wink, wink. And while there were moments where I laughed and grinned, there were a couple of points in the story, particularly in the last few chapters, where my heart clenched in my chest and then the tears came. Sigh. Who doesn't love a good cry, especially brought on by a wonderful story about living your best life with pride and never settling for the ordinary. And Starting from the Top? It was far from ordinary in my book, which is why it snags five-plus stars.
-------------------------