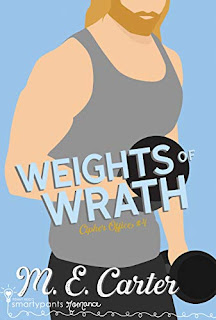 Note: An advanced reader copy (ARC) was provided by Smartypants Romance.
Weights of Wrath is the fourth novel in the Cipher Office series from Smartypants Romance, and it's the third one written by M.E. Carter (Sticking to the Script, book two in the series, was penned by Stella Weaver). I fell in love with Carter's writing via her Hart series, and my adoration for her books was cemented with her Mutiny series. So, it kills me that I'm not connecting as much as I wish I was with her Cipher Office books. Her writing is still spot-on, but I'm not clicking with the characters or the story compared to my past reading experiences with her books, and that includes her co-authored novels. And it absolutely kills me to say that because I truly love this author's writing in general.
Rosalind Palmer is a stripper who finds herself pregnant, and well, pregnancy and stripping don't actually mesh. Joey Marshall works as a trainer and doesn't know a whole heck of a lot about being a parent, but he's going to have to learn quick because he got his cousin's best friend pregnant. Both Rosalind and Joey are determined to make a true go of co-parenting, but Joey believes they can have it all--their baby and an honest-to-goodness happy ending. Convincing Rosalind, however, won't be easy, but Joey is quite determined. What'll it take for her to see that his place is right by her--and their baby's--side forever?
First things first: Both Joey and Rosalind were good main characters who had interesting back stories. Admittedly, Joey was the sort of guy that made it easy to fall in love with him. He was, hands down, my absolute favorite part of the entire book. Rosalind, on the other hand, was someone who I struggled with a bit. It wasn't that she wasn't likable, just more...aloof. I missed that connection that I look for in my main characters. Weights of Wrath as a romantic comedy, and I just wanted more of both. I'm giving this three stars.
-------------------------

Read my reviews for the Cipher Office series:

Sticking to the Script (book two) - five stars - My Review