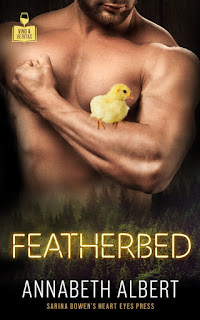 Note: An advanced reader copy (ARC) was provided by Heart Eyes Press.
The Vino & Veritas series within Sarina Bowen's World of True North is the one that I've been most excited for. After all, I make no secret of the fact that while I love the romance genre in general, LGBTQIA+ romance sits atop my list of favorite sub-genres. I also think it's awesome that I'm familiar with about half of the announced authors taking part in the series because I've read and enjoyed their work in the past while also being eager to discover new-to-me authors and see what I've been missing out on. It's totally a win-win!
The series kicks off with one of my favorite M/M romance authors, Annabeth Albert. Featherbed is an opposites attract romance, with Harrison Fletcher and Finn Barnes as the main characters. Harrison is a forty-two-year-old lawyer from Manhattan, New York who moves to Burlington, Vermont with his mother to open a bookstore and wine bar. On the other hand, Finn is in his early to mid-thirties and works on the family farm, with chickens being his specialization. Both have preconceived notions about the other, some due to past experiences, but can a friendship flourish between them, especially one with a whole lot of benefits but without any strings attached or any commitments exchanged?
I quite enjoyed this series starter! Harry and Finn were a great couple, and the development of their relationship was certainly one of the highlights of this book. They honestly didn't seem to have much in common for quite a few chapters, but once those layers began to be peeled back, it was clear that they did have certain similarities, and whatever differences they may have had proved to make their relationship more interesting as they nudged each other to see matters and issues from a different perspective. Featherbed was a sweet tale about finding love, hope, and home. Four stars!
Release Date: 15 March 2021
Date Read: 14 March 2021
Learn more about Annabeth Albert.
Pre-order Featherbed on Amazon.