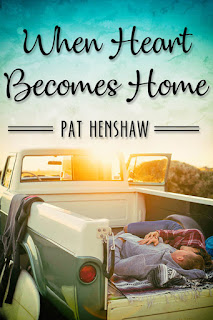 Note: An advanced reader copy (ARC) was provided by the author via Other Worlds Ink.
When Heart Becomes Home is a second-chance romance and the latest standalone from Pat Henshaw. Fifteen years ago, Gordon Westerhouse's prom night didn't end the way he'd hoped. Instead of sharing that milestone event with the boy he loved, Manuel Garcia was a no-show and left Gordo with nothing more than a muddy letterman jacket and a broken heart. After a decade and a half of keeping his distance, he's made his way from his home in Monterey, California to attend a fifteenth year high school reunion in his hometown of Shelby, California. He'll be happy to spend time with his close-knit circle of friends, but he knows he'll bump into Manny sooner or later. This is the perfect opportunity for him to return Manny's letterman jacket. It's time for him to move on. He hasn't been Gordo in years. He's Wes, and his future has no place for Manny. Except Manny is hoping he gets his chance to explain, ask for forgiveness, and to get things right.
One of my must-haves in a second-chance romance is the groveling. I don't mean the character at fault to have to beg on their knees and plead for forgiveness. It's more about making amends. Yes, the apology and explanation are important, but talk is cheap if it's not backed by action. Thankfully, Pat Henshaw did not disappoint! That being said, my heart broke for both Wes and Manny because neither one of them deserved what happened when they were just teenagers. These two weren't about the drama, but goodness, the drama was being thrown their way and mostly by two people who should have been the ones most accepting and supportive. There was another drama queen who I was sorely tempted to flip off--pun totally intended--every time they were on the page. But not every supporting character was an impediment to Wes and Manny getting their renewed shot at a happily-ever-after, so this wasn't a you-and-me-against the world sort of thing. Henshaw did a notable job with this story about first loves and second chances, and how love truly does win in the end. When Heart Becomes Homes receives four stars.
Date Read: 20 March 2021
Learn more about Pat Henshaw.
Purchase When Heart Becomes Home on Amazon | Apple Books | B&N | Kobo.