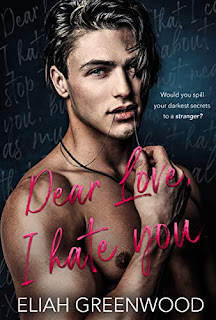 Note: An advanced reader copy (ARC) was provided by the author via Wildfire Marketing Solutions.
Dear Eliah Greenwood, welcome to my radar! One of my favorite things about being a reader and blogger is that I come across debut and new-to-me authors, and Greenwood falls in the latter category. So, not only has my first read from her left such a strong positive impression on me, she's got a few books on her back list that I look forward to checking out when I've got some free time on my hands. But let's focus on the gem of a read penned by this author that was most recently in my greedy hands--Dear Love, I Hate You, which is the first novel in the Easton Boys series, and it's set the bar extremely high!
When Aveena Harper accidentally leaves a letter she's penned but left unsigned in a book of poetry, the last thing she expects is to have someone reply to it. That's followed by a flurry of notes, and soon enough, they share their secrets with each other, both vowing to keep it all between themselves. No names are exchanged, but Aveena discovers who her secret "pen pal" is: Xavier Emery. He may be their school's lauded basketball hero, but he was Aveena's childhood bully and they didn't exactly exist in the same social stratosphere in school. Not that it mattered. Their identities were to remain under wraps from one another, as were their secrets from the everyone else. Will their hearts remain intact too?
This was truly a great read and a fantastic start to the series. Aveena and Xavier were main characters who had presence, and I loved seeing them develop as the story progressed. I know first-hand how much easier it is to be yourself when you're writing to someone whether it's old-school pen and paper or typing on a keyboard. Both Vee and Xav could be open and honest to whatever degree they chose through those notes they exchanged, and I was all for it. Eliah Greenwood did a highly commendable job putting together a story that balanced the angst with the wit, as well as having a cast of characters that pique a reader's curiosity, enough that they'll want to read what comes next in the series. And my curiousity? It's piqued AF! Five stars for Dear Love, I Hate You.
Date Read: 14 March 2021
Learn more about Eliah Greenwood.
Purchase Dear Love, I Hate You on Amazon.