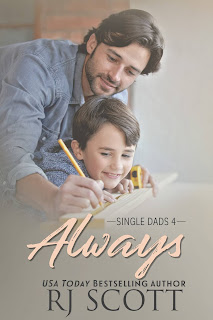 Note: An advanced reader copy (ARC) was provided by the author.
You know how bittersweet it is when a series that you've grown attached to inevitably comes to an end? Well, imagine what happens when you find out that said series isn't actually as over and done with as you'd originally and that there were still a few more books in the works! That's exactly what happened with RJ Scott's Single Dads series, which has turned out to be one of my favorite series from this prolific author. From the original trilogy, Scott's expanded the series to include three more stories, and that makes me one heck of a happy camper. I wouldn't say no to more single-parent and M/M romances since those two happen to be among my favorites when it comes to romance.
Always is the fourth book in the Single Dads series, and it features two men who are trying to transition into new phases of their respective lives. Adam Williams was a firefighter who saved a child only to lose his career because of injuries he sustained during that rescue. He's adjusting to his new life when single father Cameron Hastings and his son, Finn, land on his doorstep. The two are starting over after life as they knew it imploded hen Cameron's soon-to-be ex-husband is convicted of a crime and when they needed a place to stay, Cameron's closest friend pointed them in Adam's direction. Neither of them planned on finding love, but will Cameron's past allow them a future?
If it's one thing RJ Scott has proven to be more than adept at, it's writing the sort of romances that leave you with a smile on your face by the time you get to the end, which is exactly what happened here. Adam and Cameron were two guys who saw their respective lives going one way, only to realize that plans change, whether they wanted them to or not. I loved seeing them get closer and then begin to create their own home and family with Finn, even if they may not have noticed straightaway that that was the direction they had been headed towards all along. I enjoyed reading Always, which handily earns itself 4.5 stars. I can't wait to read the next book in the Single Dads series!
Release Date: 29 March 2021
Date Read: 29 March 2021
Learn more about RJ Scott.
Purchase Always on Amazon | Apple Books | B&N | Kobo.