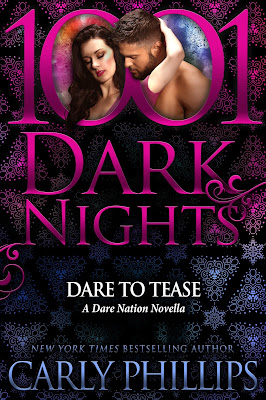 About Dare to Tease
New York Times and USA Today bestselling author Carly Phillips returns to her sexy Dare world of rich billionaire sports heroes in her new Dare Nation series!
She handles cocky jocks for a living, but her love life isn’t as successful.
Brianne Prescott, publicist for Dare Nation Sports Agency, grew up the only girl with four brothers, three of whom are sports royalty. She’s a pro not just at work but at being used by men who want access to her famous family. She’s learned the hard way that everyone wants something from her, always.
He’s her brother’s best friend and the first man who sees her for who she really is.
When Dr. Hudson Northfield rescues Bri from a homeless man outside the clinic where he works, he really notices her for the first time. Soon she’s accompanying him to New York for a family wedding, and despite her siblings’ overprotective protests, they’re falling in love.
But Hudson has a secret he can’t reveal. If he wants access to a trust fund in his name, his father demands something in return. Hudson has to marry and provide an heir or his dream of opening a state-of-the-art health center will be destroyed. Suddenly the man who didn’t need anything from her appears to be the biggest user of them all. Unless Hudson can convince her he can live without money but he can’t live without her.
Every 1001 Dark Nights novella is a standalone story. For new readers, it’s an introduction to an author’s world. And for fans, it’s a bonus book in the author’s series. We hope you'll enjoy each one as much as we do. 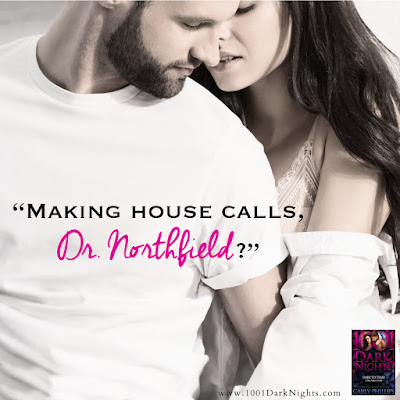 Read my four-starred review of Dare to Tease.

Add Dare to Tease on Goodreads. 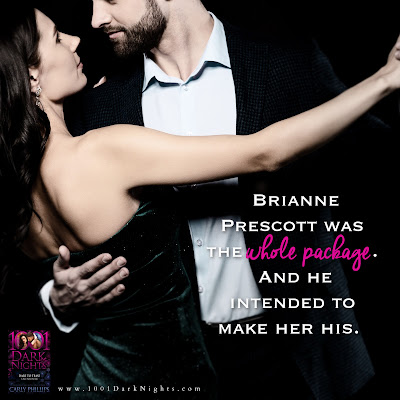 An Excerpt from Dare to Tease
“What are you thinking about?” he asked.
Their faces were close together as they spoke, creating a bubble of intimacy and making it easier to be honest. “About how much I admire you. How you could be on the money train with your family in New York, but instead you’re all about giving back. I like that about you.” She studied his expression and the look in his eyes. “What’s wrong? Something’s bothering you.”
“You’ve come to read me well in a very short time,” he said on a low chuckle. “I do have an issue to deal with while I’m home.”
She reached out and clasped their hands together. Her palms felt better now that it had been a few days since she’d fallen, and the bandages made it easier to do things. Like hold hands. “I’m a good listener … if you want to unload your problems.”
He hesitated, obviously weighing his words. “You know the plans for the clinic Braden mentioned the day he walked in on us?”
She nodded. In the rush of her sudden trip, buying a dress, packing, and making sure her clients were covered by another PR person if she wasn’t reachable, she’d forgotten to ask either man about it since.
“Braden and I want to renovate and remodel the clinic into a state-of-the-art place where people who don’t have access to insurance or good care can still come in and get treated. As it stands now, the equipment is old, the building run-down, and it’s hard to entice professionals to come work there.”
“I love that idea!”
“Obviously so do I. Braden’s going to talk to Paul Dare about funding, and I need to have the same conversation with my father. My grandfather left me money in trust, but he also made my father the trustee, and it’s at his discretion whether or not to let me have money from the principal.”
She realized he’d begun tapping a foot against the floor, his knee bouncing up and down with every contact. “You’re really wound up about this, aren’t you?” 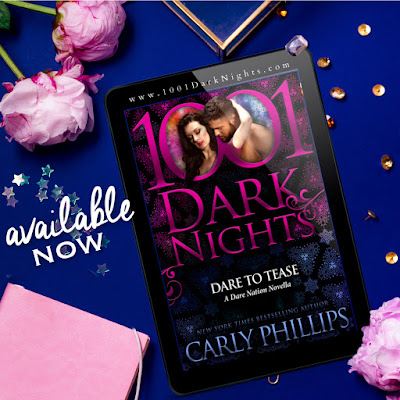 New York Times, Wall Street Journal, and USA Today bestseller Carly Phillips gives her readers Alphalicious heroes to swoon for and romance to set your heart on fire, and she loves everything about writing romance. She married her college sweetheart and lives in Purchase, NY along with her three crazy dogs: two wheaten terriers and a mutant Havanese, who are featured on her Facebook and Instagram. She has raised two incredible daughters who put up with having a mom as a romance author.


She loves social media and interacting with her readers. Want to keep up with Carly? Sign up for her newsletter and receive TWO FREE books at www.carlyphillips.com.