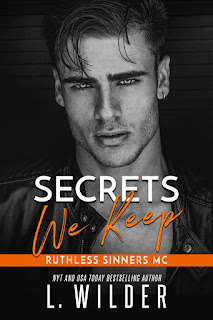 Note: An advanced reader copy (ARC) was provided by the author via Enticing Journey Book Promotions.
L. Wilder takes readers back to her Ruthless Sinners MC series with the third and latest book, Secrets We Keep. This is the story of Rafe, aka Joshua Ralph, who at sixteen first fell in love with all things motorcycle club, particularly the Ruthless Sinners. Four years later, a chance meeting with one of the brothers enables him to get his foot in the door as a prospect, and now, the guy once known as JR is better known by his road name of Rafe. Just like many of his other brothers, Rafe has no problem finding female company whenever he wants, so what is it about Marlowe Davenport that makes him stop and pay attention, hoping that he gets her undivided attention in return? For a year, all he saw of her in the year they've know each other is at the bar she worked at as she kept their interactions to a minimum. Then one night, it's just the two of them, and from there, they get closer, but will all the secrets surrounding these two end up being too much to bear?
I'd have to say that this third Ruthless Sinners MC book is my favorite in the series so far. I really liked the chemistry between Marlowe and Rafe, even though I confess that the back and forth and hot and cold, particularly from Rafe, got frustrating at times. My favorite thing about the story, though, would have to be the twist regarding Marlowe because I so did not see that coming. I also liked how it had ties to another of L. Wilder's series. I won't say which one, but if you're a longtime reader of hers, you'll probably like it as well. Just like the books before it, this newest one touts an interesting cast of characters, and there's definitely one that I'm hoping we'll get to know more about as the series progresses. For now, though, I'm quite happy with how everything turned out between Marlowe and Rafe, whose story raised the bar. Secrets We Keep garners 4.5 stars.
-------------------------
Read my reviews for the Ruthless Sinners MC series: