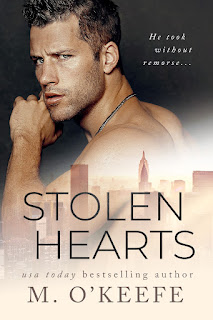 Note: An advanced reader copy (ARC) was provided by the author via Candi Kane PR.
What the... CLIFFHANGER!!! Gah!!! I had no clue when I started reading this book that it was part of a series, and I sure as heck was NOT prepared for that evil cliffy at the end. But then, don't they say that those are the best kind? Especially given the fact that this is an M. O'Keefe-penned novel and when it comes to this author, well, she's never given me reason to doubt my faith in her writing. This isn't the first time I've come across one of her cliffhanger endings, either, so maybe I shouldn't be all that surprised. But I totally am.
Stolen Hearts is the first book in M. O'Keefe's Hearts series, and readers are introduced to Poppy Maywell and Ronan Byrne. They meet on the night of Poppy's engagement to a man nearly three decades her senior, but she does what is necessary in order to ensure that her younger sister, Zilla, is taken care of. She lost count of the number of times she suffered at the hands of the man she married. But if she thought life was complicated then, being caught in between two families who want her gone has her desperate. Ronan, however, is there, and that connection they had before is ever-present. But at what cost?
I may or may not have screamed in frustration a teeny, tiny bit when I got to the end of this book. After all, I'm not exactly the world's most patient reader, so having to wait over three months for answers, aka the second book, was going to have me super antsy. M. O'Keefe has me, hook, line, and sinker, and that's due in large part to her awesome writing as well as an intriguing story line. The air of mystery throughout is intoxicating, and the mystery that is Ronan and what role Poppy plays in a feud has me itching to know everything. So yes, I'm counting the days until I can get my greedy hands on Broken Hearts. Suffice it to say, the stakes and the bar are high! I'm giving Stolen Hearts five stars.
Date Read: 18 January 2021
Learn more about M. O'Keefe.
Purchase Stolen Hearts on Amazon | Apple Books | B&N | Kobo.