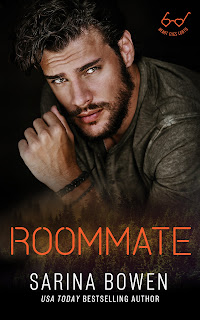 Maybe I'm a late bloomer, but I'm all in now.And not for just any guy. I'm all in for him.

If there was one supporting character in Sarina Bowen's True North series that I have been curious about ever since he made his appearance and dropped a hint or two about a part of himself that he kept secret from everyone, it was Kieran Shipley. So, his book has been a long awaited one, and I'm thrilled that it serves as a turning point of sorts as it kicks off Bowen's Heart Eyes publishing arm, this one with a focus on LGBTQ romances. Yes, it's part of the True North book universe, but it's also a spin-off and sets up the world of Vino & Veritas, a series of multi-authored books with the eponymous bar and bookstore as its backdrop. But I digress! This review is all about my new favorite read from Bowen, and the very source of one hell of a neverending book hangover: Roommate.
Twenty-six-year-old Roderick Waites didn't expect a welcome wagon upon his return to his hometown of Colebury, Vermont, but he'd certainly hoped for something more than his homophobic father refusing to allow him back into the house he'd grown up in. Getting a job at Busy Bean as a baker is a bright spot, but finding a place to stay isn't as easy as finding a place of employment. But when his co-worker notices him sleeping in his car, Roddy gets an offer he can't quite refuse. Not when it's winter and he's grown tired of not getting enough sleep. So what if it happens to be twenty-five-year-old Kieran Shipley, the guy he's crushing on and who made an impression on him eight years ago in high school? So what if the broody farmer slash barista slash artist makes Roddy want to risk his battered heart one more time? But would Kieran be ready to risk his own as well?
Roddy and Kieran... Le sigh. These two have claimed a piece of my heart, and for good reason. I swear, Sarina Bowen writes some of the most memorable gay romances that I've had the pleasure of reading, and this newest one proudly ranks among them. I appreciated how these two main characters were so distinct yet also had shared ties and similarities. My heart ached when it came to their family situations, but I actually respected the fact that this book reminds readers that not all issues have to be resolved in a storybook sort of way where everyone is hunky-dory. This was a book about love and acceptance--for and from family, a significant other, and most importantly, from yourself. There was the anticipated romance and it melded quite perfectly with elements of wit and angst and made even better with such an amazing cast of supporting characters, many of whom were very familiar. I can't recommend Roommate enough. Five-plus stars.
Release Date: 12 January 2021
Date Read: 26 December 2020
Learn more about Sarina Bowen.
Purchase Roommate on Amazon | Apple Books | B&N | Kobo.