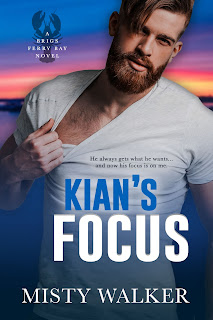 Note: An advanced reader copy (ARC) was provided by the author via Grey's Promotions.
Kian's Focus is the second novel in the Brigs Ferry Bay M/M romance series, and it's been penned by a new-to-me author, Misty Walker. This can pretty much be read as a standalone, but if you were able to read the series starter, Sheriff's Secret by K Webster, then you'll recall meeting Kian Abrams, one of several secrets of the aforementioned sheriff. Well, now he gets his own story, and finally, the happily-ever-after he deserves. Yeah, I seriously wasn't a fan of how his first love treated him while they were teenagers and then how the guy went on to find love and made Kian feel like he wasn't worth coming out of the closet for all those years ago and since they broke up. Bitter much? Yep.
It's been just over a year since forty-year-old king crab fisherman Archer Warren lost the man he loved in an accident. Now, he's moved from Alaska to Maine to help his younger sister care for her two children after being abandoned by her estranged husband. There's no room in his life for love, but maybe he can make room for lust...and friendship. That's all he can offer twenty-nine-year-old bar and club owner Kian Abrams, who also happens to be his sister's boss. When the lines blur, will a happy ending finally be in focus for these two men--one who has experienced loss, and the other who knows only rejection?
I know the blurb states that Kian is used to getting what he wants, but this was someone who wanted his first love to choose him but was found lacking, or at least not enough for his ex to step out of the closet for. So, when Archer steps into his life, he's willing to go above and beyond for this man he shares a connection with. I felt for both of them, but there were also times I wanted to shake them in hopes some sense would seep through. I enjoyed the angst and the romance and can't wait for more. Kian's Focus snags 4.5 stars.
-------------------------
Read my reviews for the Brigs Ferry Bay series: