Review: Rise of the Moon by L.P. Dover (Royal Shifters #3) 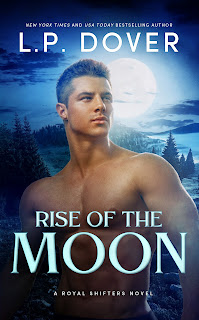 Note: An advanced reader copy (ARC) was provided by the author via Enticing Journey Book Promotions.
L.P. Dover has returned to her Royal Shifters paranormal romance series after more than five years since she released the second book, Resisting the Moon. Book three is about Laila and Cedric--she's half-wolf and half-fae and he's her mate...if she'll have him. What she believed to be true about her clan was nothing more than a falsehood in order to hold on to her. Now that she's become part of the Teton pack, one thing has become clear: Laila is Cedric's mate. Completing their bond will be complicated, but it is what is necessary in order for Cedric and Laila to be mated. The problem is, will Laila even want to stay? The fae want her to explore that side of herself that she has yet to fully delve into, but joiing their realm would mean the bond between her and Cedric may not come to pass. Could  Cedric love her enough to fight for her to stay or is it enough to let Laila go?
It may have taken more than five years for us to come back to this world that L.P. Dover created, but all I can say is better late than never! This series was one of my earliest reads from Dover, but it was also a standout because all my other reads prior to and after were either contemporary romances or romantic suspense stories. I loved the otherworldly feel of this series, and Cedric and Laila's story was enthralling to say the least. These two had such a strong connection, and it was one that demanded to be explored. That fascination I felt when I first delved into the Royal Shifters series years ago came back in full force, and I loved that melding of romance, intrigue, and suspense, all wrapped together in the world of the paranormal. This was a story about finding yourself and your mate and fighting for the future you both deserve. Rise of the Moon easily gets five stars.
--------------------------
Read my reviews for the Royal Shifters series: