Review: Change of Course by Sierra Hill (Change of Hearts #3) 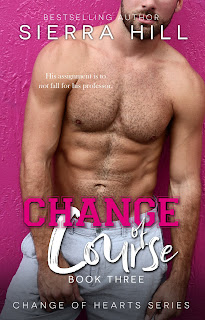 Note: An advanced reader copy (ARC) was provided by the author via Give Me Books Promotions.
I make no secret of the fact that M/M romance is my favorite romance sub-genre, so admittedly, I tend to be a wee bit picky when it comes to it. I also appreciate authors who are traditionally write M/F romance venturing into a LGBTQIA+ romance because it allows them to stretch their creative wings. Sierra Hill is an author whose work I've enjoyed in the past, and the first two books in her Change of Hearts series were good. So naturally, when the third book was announced and it happened to be an M/M romance, I looked forward to seeing what Hill would have for her fans and readers this go-around.
Change of Course is book three in the Change of Hearts series, and it features Lucas Mathiasson, best friend of Garrett Parker (Game Changer, book one of Change of Hearts). The twenty-nine-year-old college professor is very much in the closet, but a one-night stand with a bartender leaves him wanting more. The thing is, twenty-two-year-old Kyler Scott made it clear he wasn't interested in a second go-around, and he's done well avoiding Luc as much as he can...that is, until he realizes that Luc is his college professor.
There was a good amount of heat, and there was a degree of chemistry between the main characters that made the possibility of a happily-ever-after between them plausible. Where I hesitate to give this book a higher rating is with regards to the sudden shifts that make any changes abrupt and off-course (pun not intended). Luc was someone who kept his sexuality hidden and was so hesitant at the beginning, and then after one night, he becomes this proverbial hunter after his prey, aka Kyler. And it wasn't just the abrupt change in personality either that gave me pause because there was an abruptness in story as well. I seriously wanted to like Change of Course, and I honestly wish my response to it was more effusive, but it simply fell short of my expectations. Three stars.
--------------------------

Read my reviews for the Change of Hearts series: