Review: Prince of My Panties by Lili Valente (Royal Package #2) 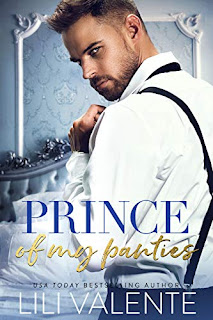 Note: An advanced reader copy (ARC) was provided by the author.
Lili Valente returns to her royal romance series with the second Royal Package book. Prince of My Panties overlaps with the events in the series starter, although either one can be read as a standalone as Valente does well with providing enough bread crumbs to both keep readers informed and pique their curiosity. The spotlight turns towards Jeffrey James Von Bergen and Elizabeth Agnes Rochat, better known as Prince Jeffrey and Princess Elizabeth. If you're familiar with the series starter, then you'll remember that Lizzy was betrothed to Jeffrey's older brother, Andrew. They were the eldest in their respective families and had been engaged since she was thirteen and Andrew was seventeen. But Lizzy had other plans in play in that first book, and readers finally see her perspective in this second one, alongside that of Jeffrey's, a year younger than Andrew.
I so adored Lizzy and Jeffrey! It felt like I was in the middle of an adventure with these two. I could imagine the book playing out as if it were a movie in my head, which says something about Lili Valente's ability to paint not just a scene but a thought or an emotion as well. The humor is there, as is the wit, and don't even get me started on the romance because that was ever-present, both sweetly and deliciously so. I loved seeing how being around Lizzy nudged, prodded, and pushed Jeffrey out of his own comfort zone. On the other hand, Jeffrey saw Lizzy for who she was and accepted her wholeheartedly, and that was something that was obvious even during that first meeting of theirs in the library when they were sixteen and thirteen, and now twelve years later. I thoroughly enjoyed Prince of My Panties, and look forward to Nick and Zan's story next!
-------------------------
Read my reviews for the Royal Package series: