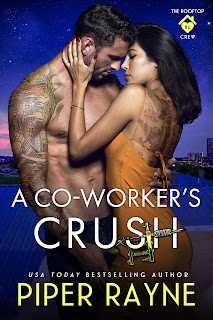 Note: An advanced reader copy (ARC) was provided by the authors via Wildfire Marketing Solutions.
We bade farewell to my favorite Piper Rayne series, The Baileys, late last year, and now, with only a handful of days into the new year, we're saying goodbye to yet another series, The Rooftop Crew. A Co-Worker's Crush is the sixth and final novel in the series, and if you've followed the series, then you'll get why this is such an anticipated read. Jax Owens knows exactly which of Frankie Grant's buttons to push, which is why he's earned her ire, something he's picked up on every single day they work together in the same tattoo studio. Sure, he's actually quite sweet when it comes to Frankie's young daughter, Jolie, but the single mother's interactions with the cocky single guy leave a bitter taste in her mouth. Both Jax and Frankie know getting involved would be a mistake. They have way too many issues, but could crushing on each other lead to three hearts getting crushed?
The writing duo of Piper Rayne know how to deliver romance and comedy, which is why they're easily one of my go-tos when it comes to rom-com reads, but they also happen to know how to weave in angsty moments. We're not talking about drama for the sake of drama here either. Jax and Frankie, and Jolie as well, have been through a lot in their respective lives, and my heart went out to all of them, especially considering how the adults had come so far, yet the scars from their respective pasts were there, and the pain remained. I'm also a sucker for juvenile characters who have such a presence on the page, and that was exactly what Jolie was. I just wanted this trio to become the family unit that they deserved to be and to have. The last few chapters of A Co-Worker's Crush made my heart want to burst in happiness for all of them. Le sigh. This receives 4.5 stars.
--------------------------