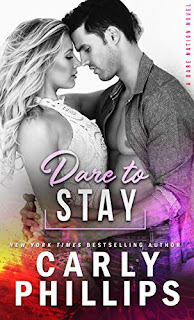 Note: An advanced reader copy (ARC) was provided by the author via Wildfire Marketing Solutions.
Carly Phillips kicks off the new year with the fourth addition to her Dare Nation series, Dare to Stay. This second-chance romance features Braden Prescott, who joined Doctors Without Borders in hopes of finding himself while also helping out in place that need more medical professionals. He knew he would be leaving behind not only his family but the girl that he had been seeing--Willow James. He thought he could hit the pause button on what he had believed was a casual relationship; she decided to hit the stop button instead, walking away from him as she ended what was going on between them. Two years later, Braden is back, taking the top spot in the medical staff of Miami Thunder. Willow is still there as the team's athletic trainer. She promises to be professional, but what Braden wants from her is far more personal. Could she give him one more chance?
Braden is the Prescott sibling who didn't have any ties to sports growing up, which made him the odd man out in such a sports-oriented family. It was interesting to be in a job post-Doctors Without Borders that was connected with football and had family ties. If I'm being perfectly honest, there were moments in the first half or so of the book where I wasn't sure how to feel about Braden, and Willow to a lesser degree. I wasn't a fan of him being as persistent and aggressive as he was in pursuing Willow even when he knew she was dating someone else. Then there was Willow who could have chosen to be upfront with the guy she was seeing but instead handled matters in a way that wasn't all that. Making said guy be a stalker-like villain was a wee bit forced, but I did appreciate the second half of the story more, which is why I'm giving Dare to Stay four out of five stars.
-------------------------