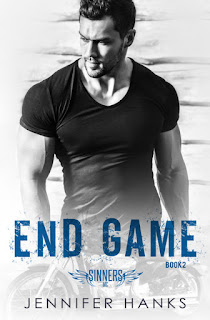 Note: An advanced reader copy (ARC) was provided by the author via Give Me Books Promotions.
End Game is the second novel in the Sinners MC series penned by Jennifer Hanks, and this time around, the spotlight is on the club's president, John Pierce, aka Bear, and the woman who gives him a run for his money, Josie Carmichael. If any two people knew how to push each other's buttons, it would be Bear and Josie. He was broody, intimidating, and every bit the alpha; she was stubborn, independent, and didn't like to be pushed around. When Josie draws the ire of the Sinners MC's enemies, Bear decides to offer her the club's--and his own--protection. That doesn't mean, however, that Josie readily accepts, causing the two strong-willed individuals to bicker, almost as if battling for dominance. However, beneath the arguments belies the undeniable attraction they have. Can they reach common ground to fight for their love and defeat all their enemies?
Jennifer Hanks continues to impress with this newest addition to her motorcycle club romance series. Bear was very much the quintessential MC romance hero, what with his being a biker who makes no apologies for his lifestyle and who he is but also having a big heart for his brothers and the woman he's falling for. I liked seeing who he was beneath all the layers, making for a truly interesting main character. Josie, on the other hand, was someone who took a bit of getting used to. In short, I didn't click with her as quickly as I would have hoped. There were times where I wanted to tell her to take a step back and chill, but once had a more open heart and mind, it was easier for me to connect with her. The suspense element of the story melded really well with the romance, and Hanks certainly has me excited for more from the Sinners MC series. End Game snags 4.5 stars.
---------------------------
Read my reviews for the Sinners MC series: