Review: The Hot Mess and the Heartthrob by Pippa Grant (Bro Code #4) 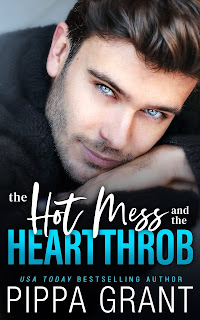 Make a woman laugh and come, and you've set the standard by which she'll judge every other man.

I'm not just her for the pussy.

I'm here for the whole package.

I'm apologizing in advance for the barely disguised fangirling this review will put on display. Okay, I'm not really apologizing, because hello, why should I apologize for gushing over an amazing romantic comedy?! Pippa Grant absolutely brought both those elements in a story that made me snicker and giggle numerous times and had me laughing out loud more than once while also enticing me to cheer the main characters on and sighing quite happily as they tried to figure out how to make their relationship work.
The Hot Mess and the Heartthrob is the fourth book in the Bro Code series, and while it can, indeed, be read satisfactorily as a standalone, I'm going to seriously encourage you to read the books in order (Flirting with the Frenemy, America's Geekheart, Liar, Liar, Hearts on Fire, and The Hot Mess and the Heartthrob--plus there's the companion novel, Master Baker, and the spin-off series, Fireballs). Why? Because these are all entertaining and endearing reads, and there is also a recurring cast of adorably unforgettable characters.
This is the story of Levi Walker, the sole member of former boy band Bro Code who remains in the music industry. At thirty-six, he's beginning to feel like something's missing, and that's saying something considering how much he's achieved in his music career. He remains a popular and respected singer and songwriter and has an amazing and loyal core group of family and friends in his hometown of Copper Valley. He's living a great life and has almost everything a man could want. So why does single mother and bookstore owner Ingrid Scott feel like the very thing that he didn't know he was missing?
Ah, this book does my heart good. It felt full, and all thanks to Pippa Grant's wonderfully penned story and characters. Levi and Ingrid, her three kids, his circle of family and friends, her own small but steady support system, his bodyguards...and Skippy, because there's just no way one should ever forget about Skippy the squirrel. I loved how Levi and Ingrid's relationship developed and how the idea of kismet was a part of their love story. This was also a story about family and home and a celebration of single parents, who may not be perfect but how they go above and beyond for their kids. From start to finish, I floved The Hot Mess and the Heartthrob, so of course, I'm going to give it five-plus stars!
-------------------------