Review: Let It Be Me by Kait Nolan (Men of the Misfit Inn #1) 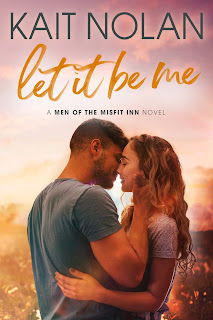 Note: An advanced reader copy (ARC) was provided by the author via Wildfire Marketing Solutions.
Kait Nolan is a new-to-me author, and my first read from her is Let It Be Me, which kicks off her Men of the Misfit Inn series. Written in the third person with an omniscient point-of-view, this is about a thirty-six-year-old single mother who finds herself with an empty nest and the twenty-eight-year-old firefighter who's waited four years to be with the woman he considers "the one" since he met her, but self-imposed hurdles are in the way.
It was four years ago when Emerson Aldridge's life changed, becoming the guardian to her best friend's teenage daughter, Fiona Gaffney. Now headed off to college, Fi is leaving home and Emerson needs to re-acquaint herself living a life solo. Her neighbor, however, is about to make his move. Caleb Romero rescued Fi that fateful night, and he became their greatest supporter since, but now, Caleb wants more than friendship from Emerson.
I had no idea going into this book that it was a spin-off of another series, Misfit Inn, and there were characters whom I assume were from there that made appearances here. That doesn't mean that you necessarily need to read the aforementioned series in order to fully understand what happens in this new series starter, although I admittedly did feel a bit lost at times, as if I had been dropped in the middle of something that was in progress.
The romance between Emerson and Caleb is quite lighthearted. There are the usual issues regarding age difference and feelings of guilt as a parent and so on. Caleb was super easy to fall in love with, and while Emerson did have the whole back and forth thing going on, she was a likable main character. Fiona was also a standout, and Mooch was a scene-stealer. All in all, Let It Be Me was a four-starred introduction to Kait Nolan.
Release Date: 09 January 2021
Date Read: 04 January 2021
Learn more about Kait Nolan.
Purchase Let It Be Me on Amazon | Apple Books | B&N | Kobo.