Review: Crashing East by Aly Stiles (Save Me #4) 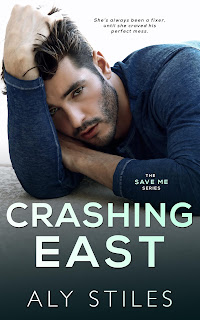 "You bring out something better in me. I don't know. It's like, maybe there really could be better days when you're around." I wave my hand in front her. "You're this weird ball of hope."

She snorts a laugh through her watery eyes. "A weird ball of hope?!"

I grin and shrug. "What? Never been called a weird ball of hope before?"

This series... Gah! Each book has taken a piece of my heart, and now, with this fourth one, well, there's nothing left. My introduction to Aly Stiles's writing came by way of Haunted Melody in 2019, but it wasn't until last year when I was able to dive into her stories once again, and it started with Rising West, the first book in her Save Me series. Of course, back then, she was still writing under the name "Alyson Santos" and the series was still titled Turner Artist Rocker. Donning a new pen name and a new series title hasn't affected her writing obviously, because Crashing East is every bit as wondrous as the novels before it. Just a quick note: The four books in the series--Rising West, Fallen North, Breaking South, and Crashing East--may be read as standalones, yet I highly recommend you read them in order, not only because of recurring characters, but also because they're all great books.
Crashing East is a play on Eastern Crush, the name of the band that twenty-five-year-old Julian Campbell once was part of. When the band imploded due to legal issues surrounding its former lead singer, Julian worried if he'd lost his shot. But then an opportunity came along, one that would find him becoming part of a new group of musicians. The timing, however, couldn't have been worse, what with his eleven-year-old niece, Naomi, abandoned by her deadbeat father. Julian is trying to juggle being the uncle his late sister believed he could be while making a true go of his new band. He certainly doesn't need another complication like twenty-three-year-old personal assistant Hadley Crawford, who just happens to live in the same apartment building as him. It's clear she can't stand him, but she may well be the thing that saves him from crashing and burning.
This book was so much more than "just" a romance, and it was far more than Julian and Hadley's love story. This was about family and music, about realizing that one dream can evolve into an even bigger one. This was also Julian's love story with his niece, Naomi, and by "love", I mean the love had for each other as uncle and niece, as two people who desperately needed family and how the definition of family isn't always about two parents and their children. That also extended to Hadley, not only because she became a part of their family, but also because of her own issues with her family. There were definitely some intensely emotional moments between Julian and Naomi, but there were also a lot of lighthearted and heartwarming ones, especially as Julian and Hadley fell in lust, like, and love. Le sigh. Crashing East is a highly recommended read. Five-plus stars!
-------------------------

Read my reviews for the Save Me series: