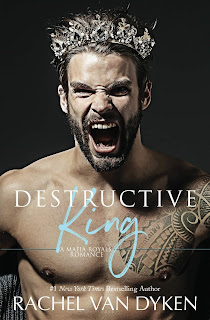 Note: An advanced reader copy (ARC) was provided by the author.
I have been trying for days to come up with a way to write this review without messing things for readers who have yet to read the book. Spoiling Asher Abandonato's story would be a travesty, given that it's one that needs to be experienced first-hand. This is also the point where I need to gently suggest the series be read in order. Yes, yes, I know about standalones and all that jazz, but this spin-off mafia romance series, like its parent series, Eagle Elite, is a saga. To give it the justice it deserves, I implore you to start with Royal Bully and work your way to Destructive King. I promise, it'll be so worth your time.
Don't try to tell Asher Abandonato what true loss feels like; he knows it all too well. The girl he loved is gone, taking with her the promise of their future together--the future of the Cosa Nostra. The anguish he feels is overwhelming, but it is nothing like the rage that thrums through him. He mourns what he's lost, and he needs someone to blame--someone he can devastate, and Ash has set his sights on Annie Smith. She was a mistake, one he seemingly can't rectify, not when she was under his family's protection. Instead he'll lure her in, tempt her and make her fall, but could she end up taking him down, too?
What I'm about to say is probably not going to make sense, but I just need to put it out there: I had a feeling. Yep, I'm leaving it at that. I seriously loved the direction Rachel Van Dyken took Ash's story. It was raw and gritty, and goodness, the guy truly lived up to the title she gave him as a destructive king. And Annie? Well, there was so much more to her than meets the eye. These two were a joint force to be reckoned with, and with everything they went through, they proved that there was nothing they could not withstand as long as they were together. Gasp and swoon. Five stars for Destructive King.
-------------------------
Read my reviews for the Mafia Royals series: