Review: Not My Match by Ilsa Madden-Mills (The Game Changers #2) 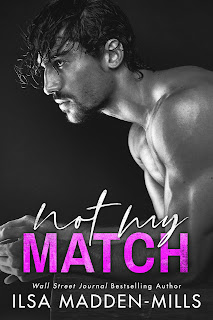 Note: An advanced reader copy (ARC) was provided by the author via Montlake.

"Oh, Devon. You are the best person in all my universes."

After reading Not My Romeo last year, Not My Match quickly became one of my most anticipated reads for 2020, and boy, oh boy, Ilsa Madden-Mills did NOT disappoint! This second novel in the Game Changers series is the story of Devon Walsh, twenty-eight-year-old wide receiver for the Nashville Tigers and best friend to Jack Hawke, and Giselle Riley, graduate student, secret sci-fi romance author, and twenty-four-year-old sister of Elena Hawke née Riley, aka Jack's wife. (FYI, Jack and Elena's story plays out in the series starter, Not My Romeo.) You don't necessarily need to read one book before the other because they do work rather well as standalones; however, I highly recommend you read both books because they truly are quite lovely reads with a wonderful cast of characters.
Giselle Riley's day couldn't possibly get any worse. Not only did adviser make it clear he didn't think she was all that, but her latest date via an online app is an absolute dud. But then, it does get worse when a fire breaks out in her apartment building, leaving her with nowhere to stay and worried about her elderly neighbors. Devon Walsh, however, is there to swoop in, offering his own home for Giselle to stay at in the meantime, even extending the invitation to Giselle's neighbor's pooch. Maybe he can even help her out when it comes to her dating woes. Lord knows he couldn't possibly do worse than Giselle's online picks. Because worse would be if he acted on his feelings for her. There's no way someone like him would ever be good enough for someone like her. But maybe, just maybe, he'll soon realize the grump and the genius aren't such a mismatch after all.
Giselle and Devon... Gah! How I adored these two! They most certainly belonged together, but they had their respective shares of insecurities and issues that served as hurdles to them getting to that point. I loved how they brought out the best in each other, offering not just love but support and understanding as well, with one accepting the other wholeheartedly, without strings or caveats. There's wit and humor, but there's also some angst, touching upon heavier issues like alcoholism and abandonment. The author did a splendid job balancing all the aspects of her story and main characters, but then this is Ilsa Madden-Mills we're talking about, and I wouldn't have expected anything less. That's two books in a row that have proven to be absolute gems in this series. Dare I hope for more? There are AT LEAST three more supporting characters whose stories MUST be told. Fingers crossed! For now, I shall bask in my Not My Match book hangover. Five-plus stars.
-------------------------
Read my reviews for the Game Changers series: