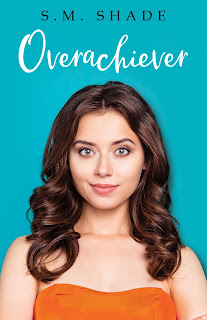 Note: An advanced reader copy (ARC) was provided by the author via Wildfire Marketing Solutions.
S.M. Shade returns to her romantic comedy series, Slumming It, and book number definitely brought the swoons and the snickers. Overachiever is a friends-to-lovers romance featuring Remee Shaw and Owen Wright, friends, college students, and residents of the apartment complex along Violent Circle. Remee has always been the girl with a plan, and nothing and no one is allowed to distract her from it. When she finds herself stuck spending the summer doing volunteer work for Building Hope, she's wary because she's no exactly adept at doing construction. The fact that Owen is also doing the same thing helps since having a friend may help her feel less of the odd girl out. But Owen's own plan shifts when he realizes this could be his chance to finally act on his secret feelings for Remee. Will a relationship be a distraction that leads to the destruction of a great friendship, or could an overachiever and a goofball have their happy ending?
This book was equal parts hilarious and heartwarming! Owen was definitely the source of most of the hilarity. After all, he was the guy who was the guy who brought the laughs within their circle of friends and even his own family. However, he also had a sentimental side to him, as well as one heck of a sweet side when it came to the girl he had been crushing on for a good, long while. Now, that doesn't mean Remee wasn't funny; she was in her own right, particularly because she was more responsible and straight-laced, so whenever she let loose and simply relaxed, especially around her friends, she could actually be silly, too. The main complication to their happily-ever-after, of course, had to do with Remee's being an overachiever and stickler for sticking to her plans. However, love conquers all--as it should--and that isn't a spoiler because, hello, this is a romance and HEA is a must! Overachiever was a 4.5-starred read for this underachiever!
-------------------------
Read my reviews for the Slumming It series: