Review: My Kind of Love by Nikki Ash (Finding Love #1) 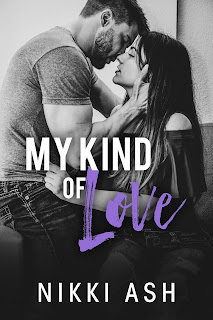 Note: An advanced reader copy (ARC) was provided by the author via Enticing Journey Book Promotions.
My Kind of Love is the first novel in Nikki Ash's new Finding Love series, which is the newest spin-off in her Fighting book universe, following the original Fighting novels, then the first spin-off, Fighting Love. This new series starter has strong ties to the Fighting and Fighting Love series. Fighting with Faith (Fighting book two) is the story of Bentley and Kayla Cruz, whose adopted son is Ryan, and Tapping Out (Fighting Love book one) is the story of Marco and Bella Michaels, whose daughter is Micaela. Ryan Cruz and Micaela Anderson nee Michaels are the main characters in this latest Nikki Ash novel. While I was able to fully enjoy this new book on its own, my curiosity is getting the better of me and the two earlier series have really bumped up my never-ending to-be-read (aka TBR) list!
Ryan Cruz is twenty-eight and has been in the military since he graduated from high school. He married his best friend, Laura, back then as well, not out of romantic love, but the sort of love one would have for a person he cared for deeply and wanted to ensure that she had what she needed in life. Except he could offer her the kind of love she wanted and deserved. On the other hand, twenty-year-old Micaela Michaels was also only eighteen when she married her husband, Ian Anderson, and together, they had the rest of their lives all planned out. They were each other's happily-ever-after...but she lost him too soon. Their parents are long-time friends, but it's been awhile since Ryan and Micaela last saw one another. A few days together in one house irrevocably change both their futures.
This was a heartrending read at certain points, what with the sense of loss and mourning, and trying to find a way to move forward in order to have a future while also honoring and acknowledging the past. Ryan was such a wonderful main character, one who I easily empathized with. There was so much more to him than you'd think, and I appreciated getting to know him. As for Micaela, admittedly, there were times where the age difference was undeniable, i.e. her immaturity would kick in. I don't fault her for that because I'm the first to admit that I may be in my forties but I still have bouts of being a complete brat. I appreciated that these two had their challenges, both as individuals and as a couple, which allowed them to realize how vital it was for them to fight for what they had--because their kind of love was so worth fighting for. 4.5 stars go to My Kind of Love.
Release Date: 21 January 2021
Date Read: 20 January 2021
Learn more about Nikki Ash.
Purchase My Kind of Love on Amazon.