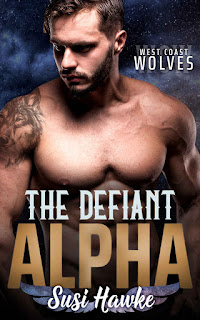 Note: An advanced reader copy (ARC) was provided by the author via Gay Romance Reviews Tours & Promo.
Susi Hawke is back with the second book in her West Coast Wolves series, and The Defiant Alpha is the story of Lucian Smith, an alpha who was rejected by his own parents, and Charles "Charlie" Smith, aka Thirteen, an omega who narrowly escapes captivity. If you've read the first book, The Reluctant Alpha, then you'll recall that the West Coast Wolves are a group of brothers who, while not bonded by blood, were bonded by the fact that they had no packs of their own. After the events in the series starter, the members of the West Coast Wolves each end up getting a pack for them to lead--to become their alpha.
Lucian Smith never thought he'd be the alpha of his own pack, but months into being just that to the Tehachapi Pack, he's fitting into the role quite well. When he spots a severely injured dog on the side of the road, the last thing he expects is to discover that it isn't a dog but a wolf, and not any ordinary wolf--it's his true mate. The bond between them is undeniable, and going from someone named Thirteen with nearly no interaction with outside world to Charlie Smith is a journey Lucian has vowed to be there for, but learning the truth about who Charlie really is and rescuing his brothers is easier said than done.
Like the book before it, this second West Coast Wolves story had and held my attention from beginning to end. I love the bond between Lucian and Charlie, and how Charlie is welcomed by Lucian's pack without question, although his presence did spark a slew of unexpected revelations. It was also great seeing Matt and Eli, whose story is in book one, as well as the rest of the West Coast Wolves plus Ash and Isaac and quite a few new ones, namely, Charlie's "brothers" and notable members of the Tehachapi Pack. Susi Hawke has created an intriguing world and I can't wait for more. Five stars go to The Defiant Alpha.
-------------------------
Read my reviews for the West Coast Wolves series: