Review: The Stud Next Door by Kendall Ryan (Frisky Business #3) 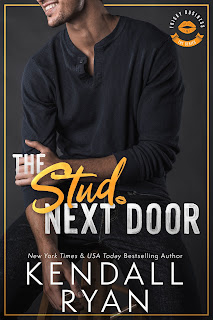 Note: An advanced reader copy (ARC) was provided by the author.
There's some frisky business happening between the single dad and his daughter's nanny in book three of Kendall Ryan's Frisky Business series. The Stud Next Door is the story of thirty-year-old Connor Blake, who went from single and ready to mingle to single dad needing a nanny so bad...for his daughter, Marley...okay, and for himself, but in a completely different way. His new next-door neighbor, Jessa McClaine, turns out to be a godsend. He immediately notices the care and ease she has with Marley; he also can't help but notice just how gorgeous the twenty-something woman is. But if it's one thing about nannies that Connor knows, it's that you never sleep with the nanny. However, there's just something about Jessa that calls to him. Will becoming involved with her, especially knowing that she's leaving, end up costing Connor and Marley broken hearts?
This was a really cute story! I admittedly have a thing for single parent romances, what with it presenting a different set of dynamics compared to the usual. Connor and Jessa definitely had chemistry, but I appreciated that they tried their darnedest to resist the temptation that the other represented. After all, Marley had to take precedence over anything and everything else. Naturally, resistance was futile, and I loved seeing Connor and Jessa form their own family unit with Marley. Also, hats off to Kendall Ryan for not making Marley's mom, Beth, some evil villain who was set on wreaking havoc on Connor and Jessa's flourishing relationship. Yes to healthy co-parenting! The Stud Next Door was an easy, breezy read, and one that I enjoyed from the beginning till the end. Four stars.
-------------------------
Read my reviews for the Frisky Business series: