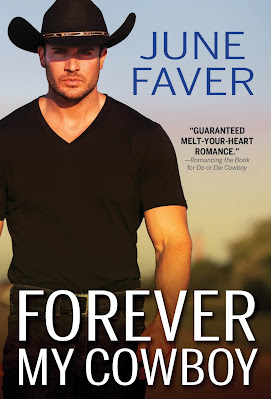 Forever My Cowboy
(Garrett Family Saga #2)
by June Faver
Date Released: January 26, 2021
Sourcebooks Casablanca
About Forever My Cowboy
The Garrett family have been ranchers for generations—they love the land, and the joy of family and children.
Cade Garrett’s orderly life is upended when his sister and her husband are killed in a plane crash. He's ready to step in and take care of their two young children, but he’s thrown for a loop when the children’s aunt is named their guardian and plans to take the children with her to Dallas.
Unexpected sparks fly when he meets Jennifer LaChance. Can Cade and Jenn band together for the good of the children—or that create all kinds of opportunities for friction?

An Excerpt from Forever My Cowboy
Tyler Garrett climbed out of his big double dually truck and rounded the cab to open the door for his lovely wife. He took the containers out of her hands and helped her slip down to the ground.
“Is he expecting us?” she asked.
Ty shook his head. “You know Cade doesn’t stand on ceremony. Cade is all about family.” He gave her a kiss on the cheek.
“Poor man,” she said. “I haven’t really accepted the fact that Sara is gone. I can’t imagine how he feels.”
Ty gestured toward the house. “Sara was a little brat when we were young, always tagging along…but she was sweet. Turned out to be really smart in school. When she and Jason LaChance got married, it was what everyone expected. She fell in love with the flyboy as soon as she set eyes on him.” He shook his head. “Great couple. I guess I never thought anything could happen to them. I haven’t really kept up with them lately, but they always looked so happy together when I saw them in church.”
Leah made a scoffing noise. “You’ve been so wrapped up in your music, it’s a wonder you keep up with anything.”
He leaned against the doorbell. “I just try to keep up with you.”
The door opened and Cade Garrett stood inside, appearing to be exhausted. He had always been a big, good-looking man, but sorrow was etched deeply on his face. Without speaking, he stepped back and gestured them inside.
“It’s just me and Leah,” Ty said, ushering her inside.
She took in Cade’s appearance, obviously sympathetic. “Um, we brought you a little something.”
“Hey, Leah. That’s very kind.” He shook his head. “I’m just overwhelmed at the moment.”
“We’re all just devastated about Sara and Jason.” Ty reached out to Cade, wrapping his arms around him and holding him for a long moment. He felt a tremor ripple through Cade’s body.
Cade drew back, his eyes lowered and lips pressed together. “Thanks, Ty. Let’s go back to the kitchen.” He led the way but turned and put his finger to his mouth. “The kids are here.”
Ty and Leah followed Cade as quietly as possible. Ty set the container on top of the counter and Leah placed a paper bag next to it.
The kitchen occupied one end of a sizable combination family room and casual dining area. A large television was mounted above the fireplace mantel, and a big yellow SpongeBob image cavorted across the screen. On Cade’s sofa, a tiny, diapered girl slept on her stomach, drooling. Fortunately, there was a small blanket under her.
Leah smiled. “Aw, Lissy’s so pretty.”
Leo had wedged himself under the coffee table, lying on his side with his knees folded up. He gazed at them with large blue eyes…as sad as Cade’s own.
“That’s where Leo has holed up,” Cade said. “He’s pretty confused right now.” He shrugged his wide shoulders. “I guess I am too.”
Ty felt his cousin’s aching grief. “Dad wanted us to tell you, he’s got your back. Anything you need.” He spread his hands. “He figured you didn’t need the entire Garrett clan to cluster around you right now, but we’re all here for you.”
“Thanks, Ty. Did you draw the short straw?” A wry smile lifted one corner of his mouth.
Ty grinned in return. “No, asshole. I got to come because you and I were in the same grade all the way through school. We’re more than cousins, bro.”
“I know, bud. Just giving you a hard time. What did you do with your kids, Ty?”
Ty removed his Stetson and tossed it on a side table. “Leah’s grandmother is taking care of the kids. Gracie is helping.” He had to smile when he thought about how much Gracie loved her brand-new baby brother. “She loves playing big sister.”
Cade nodded, seemingly wrapped in emotion. “I hope I can be good enough to raise Sara’s kids without screwing them up. That’s my biggest fear.”
Ty gave him a slap on the shoulder. “Oh, get over yourself. I’ve never known you to lack confidence about anything. In school you did okay, and you were a leader in sports.”
Cade raked his fingers through his thick, dark hair. “I know, but this is different. More important.”
“You can always lean on your family if you need a break. I know Leah and I can keep the kids for you.”
Leah nodded, adding her support.
Cade took a wide stance and hooked his thumbs through his belt loops. “Thanks, man. That means a lot…but I think, right now, I need to keep them as close as possible. They need to know I’m doing what Sara would want me to do. I’m going to raise her children as she would want them to be brought up.”
Ty realized Cade was just speaking through his grief. “You and the children are going to need all the family you can get. The Garrett clan is a formidable force around here.” He turned to see his beautiful wife doing what Leah would always be doing: leading with her heart.
Leah was sitting on the floor, her back against the sofa. Leo had crawled out from under the coffee table and was plastered against her like a baby monkey clinging to his mom.
Ty swallowed hard, while Cade stared at her, openmouthed. “It’s okay. She has that effect on kids… Heck! She has that effect on everyone.”
Excerpted from Forever My Cowboy by June Faver.
© 2021 by June Faver.
Used with permission of the publisher, Sourcebooks Casablanca, an imprint of Sourcebooks, Inc.
All rights reserved.

About June Faver
June Faver loves Texas, from the Gulf coast to the panhandle, from the Mexican border to the Piney Woods. Her novels embrace the heart and soul of the state and the larger-than-life Texans who romp across her pages. A former teacher and healthcare professional, she lives and writes in the Texas Hill Country.
Connect with June
Website | Facebook | Twitter | Goodreads