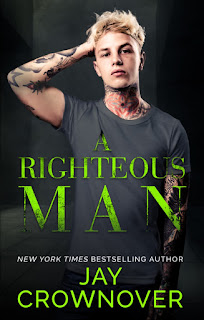 "When I got sober, one of the first things to cross my mind was looking you up and seeing how you were and asking if there was any way you could forgive me. I'm not a kid anymore, and the way I want you is very, very adult."

Ah, I do love me a wonderfully crafted story about romance and redemption, and when the creative force behind the words happens to be one of my favorite authors, well, then so much the better. Jay Crownover may have just wrapped one series, but she also managed to release one more standalone right before the year (and what a year it's been!) ended. That book is A Righteous Man, and it's the story of two co-stars, one considered America's Sweetheart, the other hottest young actor of the moment. When she witnesses something shocking, she acts out of concern for his welfare, and he nearly costs her her career. So what happens when the opportunity of a lifetime lands at her feet, and it so happens to come from the very actor she swore she would never work with again?
I haven't had a major book hangover in a good, long while, but I finally got my first of the new year, thanks to the awesomeness that is Jay Crownover's book. Salinger Dolan and Maren Copeland were such engaging main characters, and it was way too easy to fall in love with them and their story. In the decade since they last saw each other, Maren's anger for him hasn't dissipated, but Salinger's remorse knows no bounds. Now thirty-six and twenty-six, respectively, their paths are bound to intersect--maybe with a bit of help from one or two people. I appreciated that Maren didn't immediately forgive Salinger. I know that sounds weird, but it was part of what helped me connect with her. She needed the time to wrap her head--and heart--around the fact that Salinger had, indeed, changed. Trust, after all, is earned and actions speak louder than words, and boy, did Salinger earn that trust and his actions spoke with as much fortitude and dirty eloquence as his words.
Then there was Salinger... Ah, Salinger, Salinger, Salinger. It's early days, but this guy already ranks on my list of all-time favorite male main characters AND he's officially the very first one for the 2021 list. There was just something about him that called to me. He was someone who worked his way back from the brink of absolute despair, and he doesn't sugarcoat what he went through while battling his addiction. He was so much more than I'd expected or even hoped for. THIS. This is a redemption story, and it's as gritty as it is charming. Toss in a cast of supporting characters who left their mark, never stealing the spotlight, but still capturing my attention whenever they were on the page. I perused A Righteous Man in a single sitting, inviting Jay Crownover to move me with her  remarkable righteous man and the woman who loved him. And rightly so. Five-plus stars.
Date Read: 05 January 2021
Learn more about Jay Crownover.
Purchase A Righteous Man on Amazon.