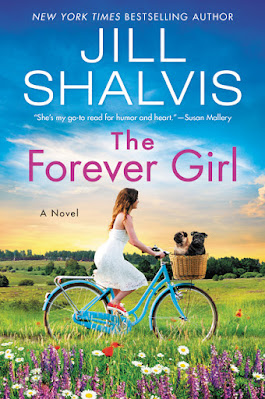 The Forever Girl
(Wildstone #6)
by Jill Shalvis
Date Released: January 12, 2021
William Morrow Paperbacks
About The Forever Girl
New York Times bestselling author Jill Shalvis does it once again with a heartfelt story of family, forgiveness, and secrets that have the power to change the course of more than one life.
When Maze returns to Wildstone for the wedding of her estranged bff and the sister of her heart, it’s also a reunion of a once ragtag team of teenagers who had only each other until a tragedy tore them apart and scattered them wide.
Now as adults together again in the lake house, there are secrets and resentments mixed up in all the amazing childhood memories. Unexpectedly, they instantly fall back into their roles: Maze their reckless leader, Cat the den mother, Heather the beloved baby sister, and Walker, a man of mystery.
Life has changed all four of them in immeasurable ways. Maze and Cat must decide if they can rebuild their friendship, and Maze discovers her long-held attraction to Walker hasn’t faded with the years but has only grown stronger.

New York Times bestselling author Jill Shalvis lives in a small town in the Sierras full of quirky characters. Any resemblance to the quirky characters in her books is, um, mostly coincidental.
Look for Jill’s bestselling, award-winning books wherever romances are sold and visit her website, www.jillshalvis.com, for a complete book list and daily blog detailing her city-girl-living-in-the-mountains adventures.
Connect with Jill
Website | Facebook | Twitter | Instagram | Pinterest | Tumblr | Goodreads