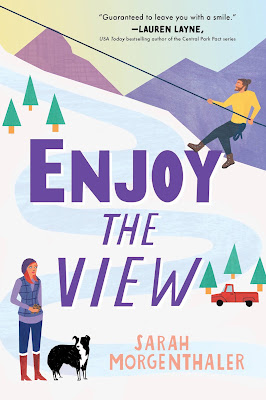 Enjoy the View
(Moose Springs, Alaska #3)
by Sarah Morgenthaler
Release Date: January 19, 2021
Sourcebooks Casablanca
About Enjoy the View
A grouchy mountaineer, a Hollywood starlet
And miles of untamed wilderness…
What could possibly go wrong?
Former Hollywood darling River Lane’s acting career is tanking fast. Determined to start fresh behind the camera, she agrees to film a documentary about the picturesque small town of Moose Springs, Alaska. The assignment should have been easy, but the quirky locals want nothing to do with River. Well, too bad: River’s going to make this film and prove herself, no matter what it takes.
Or what (literal) mountain she has to climb.
Easton Lockett may be a gentle giant, but he knows a thing or two about survival. If he can keep everyone in line, he should be able to get River and her crew up and down Mount Veil in one piece. Turns out that’s a big if. The wildlife’s wilder than usual, the camera crew’s determined to wander off a cliff, and the gorgeous actress is fearless. Falling for River only makes Easton’s job tougher, but there’s only so long he can hold out against her brilliant smile. When bad weather strikes, putting everyone at risk, it’ll take all of Easton’s skill to get them back home safely…and convince River she should stay in his arms for good.

An Excerpt from Enjoy the View
He’d just been trying to be nice. In the future, Easton was going to stick with aloof, unapproachable, and downright surly.
Nice was a pain in the ass. Nice earned him a redhead with a permanent marker and a mischievous look on her face.
Don’t stop, River had written on her makeshift sign. Filming movie.
Which was how Easton Lockett, one of the most respected men in Moose Springs, found himself standing on the side of the road with a pizza box sign, telling everyone not to stop for the woman walking down the road.
If only he’d made the same choice for himself.
The absolute last person Easton wanted to see coming down the road at this moment turned around the bend, the heavy off-road tires of her sleek black Jeep slapping the pavement. There was nowhere to hide. And knowing his sister, there was nowhere he could hide to keep her from finding him in a pride-compromising position.
With a groan of dismay, Easton waggled the sign at her as she slowed down, then pulled off the side of the road behind his truck.
“You’ve got to be kidding me.”
“I’ve been thinking the same thing for the last hour,” Easton replied, bemused.
Ashtyn Lockett had been a thorn in Easton’s side since the day she was born fifteen seconds before him. At some point since he’d seen her yesterday, she’d decided to dye her pixie cut a vibrant aquamarine with pink tips. Next week, it would be something different but equally bold.
She must’ve been taking the day off by the water, because only half of the piercings she normally sported jewelry in were filled. Her nose piercing and eyebrow were adorned, but the multiple holes in her ears were piercing free. Unlike River, his twin was dressed for the weather. A ribbed tank top showing the extensive and expensive tattoos on her arms. Shorts and sandals with bright nail polish from her morning pedicure. Even brighter colors on her fingernails.
Easton had spent a lot of his life glaring over his sister’s head at the guys who were interested in her, but there really was no need. Ash had never needed anyone to protect her. She was perfectly capable of handling her business all on her own.
“What the hell are you doing?” Brown eyes the exact same color as Easton’s eyes widened.
Sighing, Easton lifted his pizza box up in the air, turning it toward the oncoming traffic.
“I’m being a Good Samaritan.”
“Are you? Because it kind of looks like you’re making an idiot out of yourself for some tourists.”
“They’re not tourists.” Deep denial was as good a coping mechanism as any. “They’re filming some sort of movie around the bend. And before you grill me, I don’t know anything about it. I saw a woman walking down the road, and I stopped to see if she needed help. She nearly skinned me alive for interrupting her shot.”
Ash rolled her eyes. “Why would they pick here to film? Don’t they know everyone’s going to slow down and see what’s wrong?”
“That’s what I said, but she’s…well…determined.”
Gorgeous. Fiery. Way more trouble than he needed on any given day.
“How long are you planning on standing here?”
Easton didn’t know, but he’d been out there for long enough; even his arms were starting to get sore. Finally, a familiar SUV drove past and performed a highly illegal U-turn, pulling right next to Easton. River stuck her head out from the passenger seat, her face lighting up as she took in him and his sign.
“No wonder no one stopped,” she said. “You look like you want to kill someone.”
“That’s resting Easton face.” Ash smirked at him. “He’s normally worse.”
He wasn’t speaking to either of them. Nope. Not a word.
“Hey, thanks for the help. Sorry we forgot to tell you we got the shot. Here, dinner is on us.” Leaning out the window, River tucked a twenty-dollar bill in his shirt collar, not giving Easton a chance to refuse before Bree, the driver, pulled away.
Ash lost it, leaning back against her Jeep, laughing so hard, her mascara started to run.
“If you could see your face,” she all but cried.
“I feel dirty,” he murmured, taking the twenty and stuffing it into his pocket.
“You are dirty.” Gasping for breath, she wiped her eyes. “I think I love her, whoever she is.”
The feeling wasn’t mutual.
With an annoyed grunt, Easton tossed the pizza box in the back of Ash’s Jeep. “Compost this, please.”
Since his services were no longer needed, Easton decided there was no reason to stand there any longer, giving his sister ammunition.
“You never saw this,” he warned her.
“Oh, everyone saw this.”
Which was so true. In a place like Moose Springs, memories were long. The town would never—ever—let Easton live this down.
“Destroy the evidence, Ash. If you love me, destroy the evidence.”
“Don’t get your hopes up,” his twin teased. As he headed for his truck, she called after him. “I might frame it instead!”
Excerpted from Enjoy the View by Sarah Morgenthaler.
© 2021 by Sarah Morgenthaler.
Used with permission of the publisher, Sourcebooks Casablanca, an imprint of Sourcebooks, Inc.
All rights reserved.

About Sarah Morgenthaler
Geologist and lifelong science nerd, Sarah Morgenthaler is a passionate supporter of chocolate chip cookies, geeking out over rocks, and playing with her rescue pit bull, Sammy.
When not writing romantic comedy and contemporary romance set in far-off places, Sarah can be found travelling with her husband, hiking national parks, and enjoying her own happily ever after.
Sarah is a two-time Golden Heart Finalist and winner of the NOLA STARS Suzannah award.
Connect with Sarah
Website | Facebook | Twitter | Instagram | Goodreads