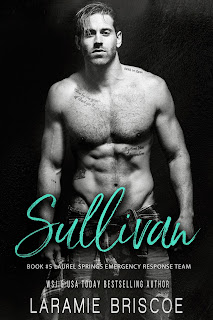 Note: An advanced reader copy (ARC) was provided by the author via Give Me Books Promotions.
Laramie Briscoe takes readers back to Laurel Springs, Alabama with her first offering for the new year. Sullivan is the fifth book in Briscoe's Laurel Springs Emergency Response Team series, and it's the story of Sullivan Baker and Shelby Bruce. These two represent law (Shelby) and order (Sully), and they happen to be two of the more recent transplants to the small town of Laurel Springs. Living in the same apartment complex and having several mutual friends has allowed their paths to cross time and again, and the two have forged their own friendship. However, there's an underlying attraction that neither one has dared to act on...until one night after a Christmas party has them doing exactly that. But is this nothing more than a blip should remain forgotten, or could it be the start of something lifechanging for both of them? What happens when danger comes after them?
Let me begin by saying that I seriously liked the first four books in this series, and I've enjoyed Laramie Briscoe's writing in general. Unfortunately, this fifth LSERT story fell short of my hopes and expectations. There was no denying that Sullivan and Shelby shared some hot chemistry, but I wasn't fully convinced until the last few chapters that what they had went beyond the physical. There was also a lack of background for both of them, and even though I've read all the previous books in the series, I struggled to remember if there was any mention of why they left wherever they used to live and decided to seek refuge in Laurel Springs. Then there was a bit of continuity issue with regards to Sully warning Shelby off of digging into Frank Gentry, yet when Sully was called to a domestic disturbance involving the guy later on, it was clear that he'd never met him before. Inasmuch as I love the series, Sullivan just wasn't up to par. Three stars.
-------------------------