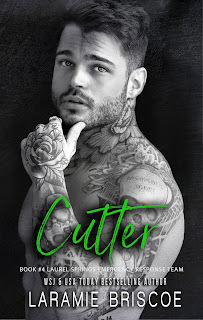 Oh, my. This book has officially become my favorite in the series so far. While I refuse to choose between the Thompson brothers, there was just something about Cutter's story that kept pinging at my heart from start to finish. Cutter is book number four in the Laurel Springs Emergency Response Team (LSERT) series, which is a spin-off of Laramie Briscoe's Moonshine Task Force series. For the record, you don't need to read the original series or any of the previous books in this spin-off in order to fully appreciate this newest LSERT novel. Go read them because they're good reads that highlight frontliners and first responders and their personal and professional lives.

Volunteering to help out the small town of Paradise Lost, Alabama during Hurricane Tatum was an opportunity for twenty-five-year-old Cutter Thompson to push himself as an emergency medical technician and make his family and friends proud of the man that he's become. He couldn't have fully prepared himself, however, for the devastation that this force of nature would bring; nor was he ready for his life to be impacted by the time he would spend working side by side with Paradise Lost EMT Rowan Baker. The twenty-five-year-old woman had survived her own unthinkable tragedy and Cutter still carries the burden of what happened back in college when he lost his scholarship. They're both still healing, but maybe now they'll realize that there's a better future waiting...together.

There was a lot to love about this fourth and latest LSERT book. After everything Cutter had gone through during his short stint in college, seeing him come into his own was really satisfying. After all, not only did he have Holden Thompson as his father but Ransom was his older brother, and I could imagine the weight of that legacy and how Cutter saw himself as a disappointment. Then there was Rowan, and goodness, but how my heart broke for her. Losing your child is horrendous enough, but to have her die in the way she did and then have all those feelings of guilt that Rowan had... Sigh. So, I really wanted to these two main characters to find a way to get together but to actually be together, and I liked how that was all resolved because I was nervous it was going to go a different way, so yay! I'm giving Cutter five stars out of five stars, and I'm excited that the fifth LSERT book is about Sullivan Baker! ♥