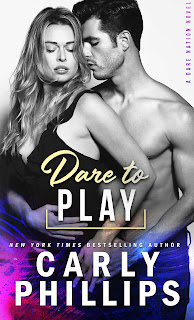 Note: An advanced reader copy (ARC) was provided by the author via Wildfire Marketing Solutions.
Dare to Play is the third novel in Carly Phillips's Dare Nation series and it features Jaxon Prescott, star pitcher for the Miami Eagles, and Macy Walker, a web designer. Jaxon maybe one of the best professional baseball players out there, but his antics off the field are garnering the sort of attention that his agent and publicist--who also happen to be his oldest brother and only sister, respectively--have been warning him about. When his latest misadventure threatens the renewal of his contract with his team, Jaxon isn't quite sure what to do...that is, until his siblings' friend, Macy, finds herself in a bind of her own.
When her stepmother returns and lets it be known that she intends to regain custody of Macy's half-sister--of whom Macy was named guardian after their father passed away--Macy decides to take Jaxon up on his offer of a fake marriage in order to give the appearance of a complete family structure for her half-sister. Marrying the baseball pitcher would be a win-win for both of them and the sizzling chemistry between them certainly doesn't hurt. But when real feelings develop, the heartbreak will definitely hurt.
I love Carly Phillips's Dare family; they're like the gift that keeps on giving. From the original series to the numerous spin-offs, it's difficult to find something to complain about. I guess, however, it was inevitable that I was going to come across at least one book that didn't click with me quite like the rest did, and that book is this third one in the Dare Nation series. Jaxon and Macy were okay characters, but their chemistry was a wee bit underwhelming. It also felt like they turned to sex every single time there was some sort of crisis they were facing. Macy's sister, Hannah, was missing? Have sex. Hannah leaves with her mother without permission? Have sex. Speaking of Hannah, this child needed discipline and boundaries, and she had neither from any adult in her life. She was rude and irresponsible and was rarely reprimanded. So yeah, not a fan. Phillips's writing was good, but Dare to Play fell short of the first two books, and it gets three stars.
-------------------------