Review: Riley Thorn and the Corpse in the Closet by Lucy Score (Riley Thorn #2) 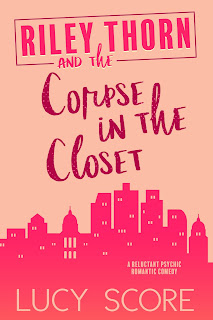 Note: An advanced reader copy (ARC) was provided by the author via Enticing Journey Book Promotions.
Riley Thorn is back, and this time, there's no dead guy next door. Nope, Lucy Score's decided to put the corpse in a closet, which explains why the title for this second Riley Thorn novel is Riley Thorn and the Corpse in the Closet. Riley is still very much the reluctant psychic that readers met and fell in love (and laughter) with in the series starter, and she and her boyfriend, Nick Santiago, private investigator extraordinaire, aren't exactly basking in happily-ever-after-dom. Not when Riley's grandmother is on her about psychic abilities. Not when Nick's parents is on him about not knowing a thing about his girlfriend. And especially not when murder is a clear and present thing in both their lives. Riley's involvement in the investigation of a corpse in a closet is stirring things up, and Nick worries that with the body count going up, Riley could well be an addition.
The first Riley Thorn book from last year was one of those pleasant surprises. I knew Lucy Score could write a romantic comedy read worth perusing, but with the additional twist of a psychic lead and a murder mystery? Talk about expectations being exceeded. So naturally, learning that there was a second book had me excited, and Score didn't disappoint. I loved seeing Riley continue to come into her own when it came to her psychic gifts, as well as her relationship with Nick developing while also reaching their comfort zone. The mystery itself was well-conceived and I enjoyed picking up clues here and there and working through who could be the villain. Score's penchant for writing hilariously heartwarming rom-com with winsome characters is taken up a notch with this series. I'm absolutely addicted! Five stars for Riley Thorn and the Corpse in the Closet.
Release Date: 08 July 2021
Date Read: 07 July 2021
Learn more about Lucy Score.
Pre-order Riley Thorn and the Corpse in the Closet on Amazon.