Review: Footsteps of the Past by Felice Stevens (Second Chances #2) 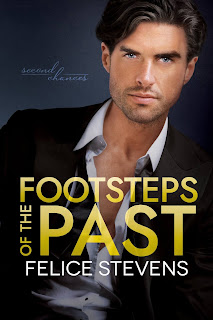 Note: An advanced reader copy (ARC) was provided by the author via Enticing Journey Book Promotions.
Footsteps of the Past is the second novel in the Second Chances series penned by Felice Stevens, and this time around, she tackles the story of an established couple dealing with the shadows of their respective pasts. If you've read the first book in the series, The List, then you'll recall Chester Braxton, one of Elliot Hansen's best friends, and his partner of nearly a decade, André Webster. If you're new to either the series or to this author, then no worries since these books can be read as standalones as they feature different couples.
Chester Braxton and André Webster could easily be the poster children for the "couple goals" hashtag. After more than nine years together, they have a good life, with careers that they've worked hard at and surrounded by supportive friends. Meeting André almost ten years ago was the second chance that Chess desperately needed, and the trajectory of his life changed. On the other hand, being with Chess is what's given André the peace that he didn't know he craved. But now, elements of their respective pasts are bubbling to the surface--things they believed were once buried can no longer be ignored. When everything is said and done, will their well-crafted life together crumble beyond repair?
When Chess was introduced as the only friend within the foursome--Elliott, Chess, Wolf, and Spencer--who was in a committed relationship, I was quite curious what story Felice Stevens had in mind for his book, and when bits and pieces made it clear there was a ripple in the seemingly tranquil life he had with André, I knew whatever Stevens had up her sleeve would be a worthwhile read. I appreciated reading a story that reminds us that even couples who are happy and in love need to continue working at said relationship and that our past doesn't always dictate our future. Footsteps of the Past earns 4.5 stars.
Date Read: 23 July 2021
Learn more about Felice Stevens.
Purchase Footsteps of the Past on Amazon.