Review: The Rival by Kendall Ryan (Looking to Score #2) 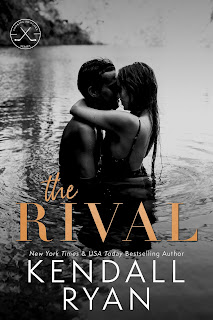 Note: An advanced reader copy (ARC) was provided by the author.
Kendall Ryan is back with the second novel in her Looking to Score series, and with its release comes new covers sporting black and white portraits of couples. They're quite stunning, and I'm a fan of black and white photos, but admittedly, I prefer the original covers, mainly because they felt more apt for the theme of the series. That being said, what really matters is what's between the covers, and Ryan continues to impress with this series. While you could try reading them as standalones, I highly recommend they be read in order because of recurring characters and certain bits of the story line starting out in the series starter, The Rebel.
The Rival is book two in the Looking to Score series, and this is Alex Braun and Aspen Ford's story. After dumping her cheating ex-boyfriend, Aspen's life appears to be back on track. She's even got a job with Boston's pro hockey team that she loves doing. After wasting years on her ex, Aspen wants to focus on herself, so entering a committed relationship is nowhere near the top of her list of priorities. Maybe indulging in pro hockey player Alex is what she needs right now. After how his last relationship ended, she doubts Alex is looking for anything serious either. But then Alex has learned a thing or two since he made his last mistake with his ex, and now, he's got his sights set on the one thing he hopes to deserve--Aspen Ford.
After how everything played out in the first book, I wanted to see how Alex would redeem himself, and if it's one thing I'm a sucker for, it's a well-written redemption story, and Kendall Ryan certainly succeeds in giving readers exactly that. Sometimes, it takes losing something (or someone) to realize just how good you had it before, and that appeared to be the case with Alex. I think that he and Aspen were a great fit as a couple, and being stuck in Canada together brought about realizations for both of them. I quite liked seeing Alex in a new light. Yes, he made his fair share of mistakes and he's definitely not perfect, but the guy's got a good heart, and maybe he needed someone like Aspen--and yes, she needed someone like him as well--to not only turn the page, but to begin a whole new story, this time with a far happier ending. I'm giving The Rival five stars.
-------------------------
Read my reviews for the Looking to Score series: