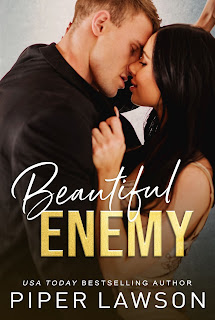 Note: An advanced reader copy (ARC) was provided by the author via Wildfire Marketing Solutions.
Piper Lawson kicks off her new series with a strong start. Enemies is a spin-off of the Rivals series, which in turn was a spin-off of the Wicked series. All that being said, you can most definitely jump into this series starter without having read either of the previous series. Book one is Beautiful Enemy, and here we have twenty-four-year-old Raegan Madani, a DJ whose career has been struggling ever since she decided to make a stand. In hopes of breathing new life into said career, Rae signs on to DJ at a club in Ibiza. Unbeknownst to her, the club is yet another owned by British billionaire Harrison King--the same Harrison King whom Rae hates with a vengeance. The thirty-five-year-old destroyed Rae's reputation when she did what she believed was the right thing to do. Now that she working for another of his clubs, it looks like Harry isn't done with her yet.
When I found out that Piper Lawson was launching a new series that would have Rae and Harrison as its main couple, I confess that I was giddy with excitement. With all the animosity Rae had towards the Brit, I was itching to see how these two would come together and what their journey would be like towards their happily-ever-after. Of course, I knew that this first book would end in a cliffhanger, so I was prepared, but now, I'm counting the days till the release of the second book next month. These two had a whole lot of sizzling chemistry brewing between them. The attraction was obviously there, but both Rae and Harrison needed to have a stronger foundation and that was going to require them being more open and trusting. I can't wait to see how the author continues to build upon this start as the series continues. Four stars for Beautiful Enemy.
Release Date: 12 May 2021
Date Read: 12 May 2021
Learn more about Piper Lawson.
Purchase Beautiful Enemy on Amazon | Apple Books | B&N | Kobo.