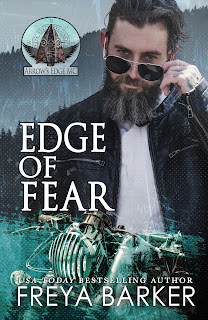 Note: An advanced reader copy (ARC) was provided by the author via Buoni Amici Press.
Freya Barker is a creative genius, and her Arrow's Edge MC series has proven to be both a highly addictive and very much endearing one. We're now four books in, and Edge of Fear is the latest one to join the club (see what I did there?). This is the part of my review where I mention that you can read this book as a standalone, although there are recurring characters and tidbits of spoiler-like information about what may have played out in the earlier books, so consider yourself forewarned. My advice is to read the books in order, just so you have a more well-rounded appreciation for these amazing couples.
Thirty-five-year-old Sophia Vieira's move to Durango, Colorado was an opportunity to start fresh, and being under the protection of the Arrow's Edge motorcycle club afforded her that. Now the manager of the Backyard Edge and finding a place of her own, everything is good in Sophia's world. The presence of a forty-two-year-old biker named Tse, however, wreaks havoc every single time he's within her vicinity. The two of them have absolutely nothing in common, and Tse believes he can't give a woman like Sophia what she deserves. That doesn't mean, though, that he isn't tempted to claim his Fee, but doing so may mean exposing her to his dark past as the guy he used to be--Ben De Léon.
One of my favorite things about Freya Barker's treatment of the Arrow's Edge MC books is the pacing. Neither rushed nor meandering, Barker keeps her storytelling at a steady pace. I felt like I was able to get to know both main characters, Sophia and Tse, quite well, and the development of their relationship was believable and had me cheering them on. There was this push and pull between them, and I loved that they kept each other on their toes, which of course, brought the anticipation level up even more. From the romance to the suspense and everything in between, Edge of Fear was a five-starred read.
-------------------------
Read my reviews for the Arrow's Edge MC series: