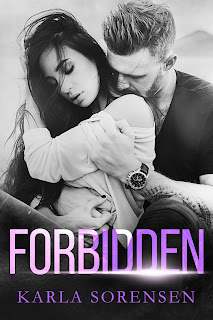 Note: An advanced reader copy (ARC) was provided by the author via Wildfire Marketing Solutions.
I didn't think this book was going to make me cry! Waaah! I wasn't prepared! Goodness, but there's just something about a single parent romance that gets to me. Forbidden closes out Karla Sorensen's Ward Sisters series, and boy, does she end things on a high. This is the story of Isabel Ward, who at twenty-five, is the lone Ward sibling who has yet to find love and her happily-ever-after. Who would have thought she'd get both with the MMA fighter that she had taped on her wall as a teenager and dreamed of one day marrying?
When Isabel Ward learns that the gym that she manages has a new owner, she's caught flat-footed, especially since the day she finds out is the day the she meets him. He's none other than Aiden Hennessey--retired MMA fighter, widower, and father to a seven-year-old daughter named Anya. It's been two years since he lost his beloved wife, and the move to Washington from California was meant to have him and Anya closer to his parents and siblings. All he wanted was routine and calm; instead he gets the unexpected and chaos with Isabel, a woman who makes him feel more than he's felt since his wife passed away--a woman who also happens to be a decade younger and under his employ.
Isabel and Aiden's story brought a smile to my face and tears to my eyes. This was as much about their romance as it was about family, and those two things together in a novel as well-written as this never fails to capture my heart. I liked the push and pull these two had in the beginning. The pull was strong, but they felt it necessary to push the other away, creating enough distance so as to lessen the impact of said pull. As for the family aspect, this is where the tears came in. The Ward siblings--well, except for Nick--share such an amazing bond, which is why they're as well-loved as they are by readers. Not only am I looking forward to the next generation of characters from the Washington Wolves and Ward Sisters series, but I hope Karla Sorensen considers a series for Aiden's siblings in the future. For now, I'm relishing all things Ward. Five stars go to Forbidden.
Date Read: 21 May 2021
Learn more about Karla Sorensen.
Purchase Forbidden on Amazon.