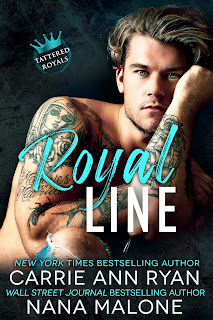 Note: An advanced reader copy (ARC) was provided by the authors via Valentine PR.
When Carrie Ann Ryan and Nana Malone announced they were joining forces to write a new royal romance series, I'm pretty sure I wasn't the only one giddy with excitement. Tattered Royals is the series and Royal Line is the series starter. This was basically a bodyguard romance with a royal romance spin to it. London Waterford is a princess from the European kingdom of Alden, and Kannon Adams is the owner of a security firm. The two are drawn to each other, but it goes without saying that a member of the royal family and their assigned bodyguard are not supposed to indulge in whatever attraction they have for each other, what more fall in love. But tell that to this fiery princess!
London and Kannon's story has a bit of suspense to it as well as a hint of mystery, and yes, the person whom I guessed was the villain from the get-go turned out to be right. These two had the chemistry part down pat, but the complications of them getting together went beyond her being royal and him being a commoner, what with Kannon's feelings of guilt regarding his past. I enjoyed their romance and I'm curious about London's three older brothers, so I'm definitely looking forward to more from this new writing duo and their Tattered Royals series. 4.5 stars for Royal Line!
Release Date: 11 May 2021
Date Read: 11 May 2021
Learn more about Carrie Ann Ryan and Nana Malone.
Purchase Royal Line on Amazon | Apple Books | B&N | Kobo.