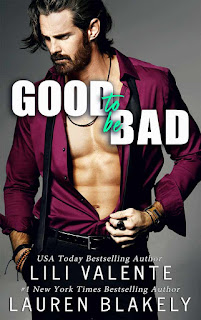 Later that night, West sends me a text.

West: This chocolate is almost as delicious as you are.

But it's a friendly swoon, I swear.

Lili Valente and Lauren Blakely are back with the third book in their Good Love series. This was the series formerly known as Good in Bed, and The V Card has been added as the series starter. All that being said, each book is meant to be read comfortably as standalones, although there are recurring characters who share ties with each other, either as friends or family. The newest book is Good to Be Bad, which pairs two shop owners who share a one-of-a-kind connection then turn out to be rather reluctant rivals.
It was a Rubik's Cube competition that led to Gigi James's and Weston Byron's paths intersecting one night. The chemistry between them was palpable, demanding to be explored, and after just a few hours together, it was clear that this could be the start of something extraordinary. In the light of day, however, one truth sends Gigi reeling. West is none other than the owner of Tea and Empathy, a new shop in direct competition with Gigi's Sweetie Pies. The best thing to do would be for her to cut her losses and walk away. But who says a good girl couldn't be bad and have the guy and her pie and eat them too?
This was a truly a fun read, one that had both authors striking a great balance of sweet and steam alongside all the sex and romance? Lili Valente and Lauren Blakely have shown once again that they're not only great rom-com authors separately but are just as formidable when they bring those writing powers together for the greater good of rom-com-loving readers like moi. There wasn't a whole lot of drama or angst in the story, and anything that needed resolving was handled swiftly but not overly so. If I did have to find something to quibble about, it would have to be Harrison and Pierce because I need their story, darn it! So, I'll give Gigi and West's journey to a sweet and tea-rrific HEA, Good to Be Bad, five-plus stars and keep my fingers crossed for Harrison and Pierce's own tale soon.
-------------------------
Read my reviews for the Good Love series: