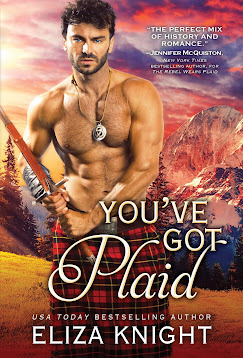 About You've Got Plaid
This Highlander is determined to help his enemy’s daughter get safely home, even if it means his own defeat...

Brogan Grant, a Jacobite soldier and bastard son of the Chief, fought savagely on the battlefield and barely escaped capture. On the run for his life, Brogan comes across what he thinks is a spy—a very bonny lass disguised as a lad, who happens to be the daughter of his clan’s enemy. He admires her bravery, but he knows what can happen to a woman alone in a war-ravaged land.
Lady Fiona MacBean is determined to do her part to ensure there is a Scottish king. Disguised as a healer, she delivers coded messages to rebels throughout the Highlands. There’s only one thing impeding her mission—a striking Highlander who’s determined to send her home.
Unfortunately, Fiona will not be deterred, no matter what the sexy Scot says. Left with little choice, Brogan agrees to join her mission if she agrees to return home when it’s over. Now the two must work together and risk everything to save the life of Bonnie Prince Charlie himself. If only their hearts weren’t at risk as well…

About Eliza Knight
Eliza Knight is an award-winning and USA Today bestselling author of over fifty sizzling historical romances.

While not reading, writing, or researching for her latest book, she chases after her three children. In her spare time (if there is such a thing…) she likes daydreaming, wine-tasting, traveling, hiking, staring at the stars, watching movies, shopping, and visiting with family and friends.