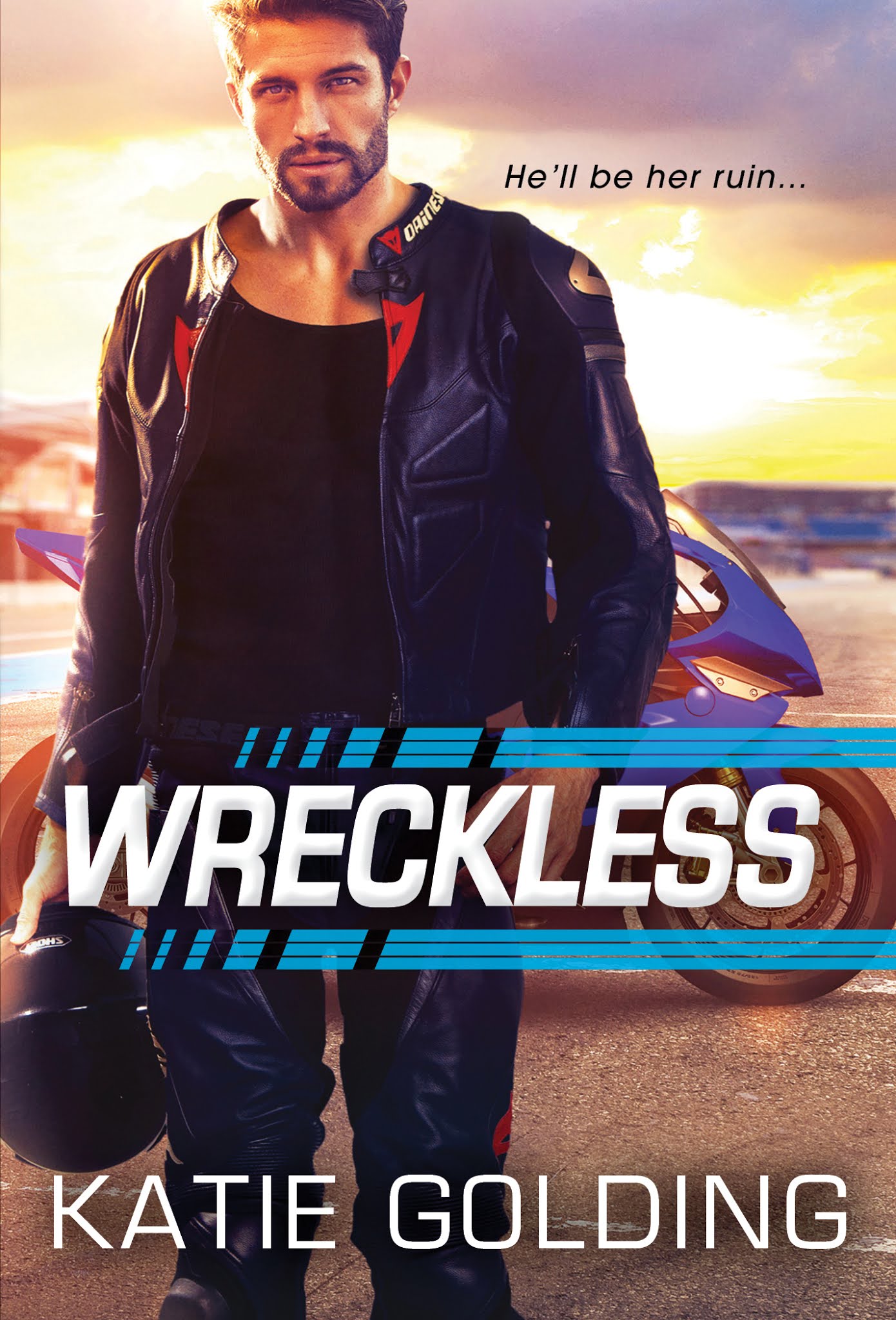 About Wreckless
She is my rival. My Tigrotta. My dearest enemy…and the greatest love of my life. But this, I can never let her know.

I’ve spent years as a professional motorcycle racer vying to prove myself to the world, even as I fought to save my family from the clutches of a man who would like nothing more than to see me fail. He’s not the only one. My Lorina—America’s Sweetheart Lorelai Hargrove—would also like me to eat her dust.

But this is the game we play. She pretends she hates me, and I wind her up as I pretend she’s not all I think about. And yet after a deadly wreck, her confidence is so shaken, my Lorina needs me to stop being her favorite enemy and remind her there is a tiger within who will do anything to win. That I want to spend the rest of my life chasing her to that finish line again and again and again.

If only the battle to make it to the podium didn’t cost us everything our hearts desire.

An Excerpt from Wreckless
“More! Harder!”
Massimo pants out a raspy groan that brings me endless satisfaction, his sharply defined arm muscles glistening with sweat. My back arches at the next hit, my hips bowing to pure power, and I cry out with all the air in my lungs, harnessing my stamina and endurance and focusing only on the sweet release of victory.
“More!”
“Basta! Enough, Lorina!”
Frank chuckles from where he’s standing guard over us in my home gym, placing another sandbag on each of our lower backs—the fifth since we’ve started doing weighted planks. Massimo’s roar on the gym floor next to me grows louder, fire burning through my abs and singeing its way through my arms and legs.
“Come on, Peanut!” my dad cheers me on. “You almost got him. He’s shaking! He’s about to drop!”
“Get those hips up, Lori,” Frank counters. “Good job, Massimo. Nice form.”
I grit my teeth through the growl tearing its way up my throat, glancing at Massimo next to me. His hands are fisted so tight, his knuckles are white, the bump of his bicep and triceps and deltoids trembling above his elbows. The scythe on his ribs bleeds a fresh drop of sweat as he strains to keep his hips up from the floor, a stack of sandbags covering the Madonna on his back.
I look away from temptation incarnate, focusing on the row of my promo posters hung on the gym wall. Massive images of me in all my different leathers over the years, flags and banners strung from the ceiling. I duck my head under another groan, determined to remember I’m home to heal and get better.
Me first. Career first. Just like Mama taught me.
Even if she no longer agrees.
“More!” I shout.
Massimo barks out something in Italian as my father puts another bag on his back, looking a little too happy about the painful noise Massimo is making. My mother, however, totally tried to set him up to stay in my room, which he super awkwardly had to decline because no, we’re not sleeping together.
Yet.
The weighted bag I called for hits my back, my core screaming as my hips sink, and I am an idiot for pushing us this far. But he’s been acting like a child all day: exercise after exercise, circuit after circuit, he won’t stop daring me into seeing who is stronger. And even though I’ve kicked his ass the whole way through, he still won’t give up.
“More,” Massimo growls, sneering at me while Frank places another bag on my spine.
A strained yell pours from my lungs. “Dick!”
“Lorelai,” my father rumbles, placing another bag on Massimo’s back.
“No more,” Frank announces. “Y’all are gonna end up hurting each other before—”
Massimo collapses almost the moment I do, but he gave out first. Sucker.
“Good job, Lori,” Frank says, already sweeping the bags off my back. A pocket of air rushes into my lungs, and holy hell, those were heavy. I am so going to regret this tomorrow. “Way to tough it out.”
“That was ridiculous,” Massimo pants out, rolling over to catch his breath. My father extends his hand, helping him to his feet.
“You’re just saying that ’cause you lost.” I push myself to standing, sweat trickling down my back and flooding the bottom of my sports bra and the waist of my leggings. I take a towel from Frank, wiping off my face and the back of my neck. I finish in time to see Massimo squirting a stream of water into his mouth, his whole upper body swelling and sinking with every breath, and it only exaggerates how freaking cut his hips are.
God, I’m totally going to end up sleeping with him. If I don’t, it’ll be a miracle.
“I did not lose.” He shakes out his hair before running his hand through it. “I made the decision that it was not worth it to keep going. I put me first.”
I scoff, taking a drink from my own water bottle. “Says the loser.”
My dad chuckles from where he’s finished helping Frank clean up the sandbags, bumping his shoulder. “Is it weird that I want to put them in a boxing ring and let them go at each other?”
Frank stares down my father. “Yes.” Then he looks to me and Massimo, clapping his hands in the signal for more torture to come. “Okay, tough guys. Since you’re still more concerned with outdoing each other than focusing on your workouts, time for jump ropes.”
“Ugh,” Massimo complains, toweling off his chest. “I am not the one distracted. Lorina can hop. She is the one who cannot—”
“Tell you what,” Frank interrupts in his I-am-so-over-this-shit voice he uses on Mason. I take another sip of water, waiting for the smackdown. “Considering I am under specific instructions from Vinicio to run your ass into the ground and keep you focused on Brno while you’re here? Five miles, now, or it becomes ten.”
Massimo glares at my manager, then points at me. “See what you have done?”
I shrug innocently with a grin so big, my face feels cracked in half. “Nope.”
Excerpted from Wreckess by Katie Golding.
© 2021 by Katie Golding.
Used with permission of the publisher, Sourcebooks Casablanca, an imprint of Sourcebooks, Inc.
All rights reserved.

About Katie Golding
Katie Golding is a sports fan with a writing problem. Based in Austin, TX, she publishes contemporary romance novels with the support of her loving husband and son. She is currently at work on her next romance novel, unless she’s tweeting about it.